Better known for his fire-breathing abilities, Godzilla is getting an icy upgrade.

On Saturday, May 18 Godzilla took over the silver screen for the world premiere of “Godzilla: King of the Monsters,” but a much smaller, bejewelled version of the fearsome kaiju dominated the red carpet. Designed by legendary Vietnamese, Houston-based jeweler Johnny Dang, aka the “King of Bling,” the necklace was worn by actor O’Shea Jackson Jr. The solid gold pendant is a 7-inch tall replica of the reptilian monster, and is encrusted with over 8,500 gems, including a number of black diamonds.

“Godzilla is a legend,” Dang said in a press release. The jeweler has also created pieces for major hip-hop names like Snoop Dogg and Kanye West. “When I was a kid in Vietnam, a guy in my village introduced us to Godzilla. I was impressed with how big, strong and powerful he was. I’m honored to create this special piece for the King of Monsters. This is a dream come true.”

No word yet on whether Dang will give Godzilla’s nemesis King Ghidorah the same jewelry treatment. 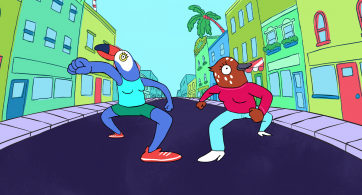 With thousands of shows vying for our attention, do we really need another adult animated TV show? Well, actually, yes. From the creators of the award-winning Netflix series “BoJack […]