As a Filipino American, I can attest to the overwhelming excitement our community feels when we see a fellow Filipino being celebrated in mainstream media. Anyone will be hard pressed to find a viral video on YouTube of a famous Filipino without a flood of comments referencing “Pinoy pride.” The term describes the joy we take in the success of other Filipino Americans, and Sunday night gave cause for celebration.

The 21-year-old half-Filipino artist H.E.R. won not one, but two awards at the 61st Grammy Awards. H.E.R., aka Gabriella Wilson, took home Best R&B Album and Best R&B Performance for her EP compilation “H.E.R.” and duet with Daniel Caesar on “Best Part” respectively.

“I’m speechless right now. I’m holding back tears,” Wilson said in the acceptance speech for her Best R&B Album. “I really want to say thank you to God, first and foremost, and my parents,, and my sister. Thank you for embracing my talents and who I am since I was a little girl.”

But who exactly is this new R&B powerhouse rocking dark sunglasses and big hair?

As a young girl, Wilson was considered to be something of a child prodigy and performed on multiple television shows. In 2010, she was appeared on the “TODAY Show” as the “Amazing 10-Year-Old Musician.” The young Wilson skillfully covered Alicia Keys’ “I Ain’t Got Nothing” on the piano as her parents beamed with pride. Her performance launched her onto the national stage. She went on to be featured on similar shows like “The Maury Povich Show,” “Good Morning America” and “The View.” At 12, she was named one of Radio Disney’s “Next Big Things” and even went on to play a tribute to Alicia Keys at the ASCAP Awards. Keys would later go on to mentor Wilson.

Despite the fact that her pseudonym stands for “Have Everything Revealed,” Wilson is a deeply private person and has avoided using her real name since the beginning of her career. Her identity was revealed in 2015, when the artist uploaded a cover of Drake’s “Jungle” on Soundcloud and fans discovered who she was through internet sleuthing. She gives few interviews and doesn’t make many public appearances. When she does go out, she wears big, dark sunglasses that mask her face. Even the cover artwork for her compilation project, “H.E.R.,” features just a silhouette of the artist.

“It’s not even hiding or shying away,” H.E.R. explained in a rare interview with Power 105.1. “For a while we’ve kind of lost the focus on what’s important and that’s the music. It shouldn’t be about the faces and associations and who has the most followers. It’s not a popularity contest to me. It should always be the music.”

Wilson won over listeners solely because of her music, which makes discovering that she’s half-Filipino feel special and exciting. It’s proof that progress is taking place and that maybe, just maybe, there will be a day where we won’t need to highlight a person’s race, just their talent.

And so it doesn’t matter whether Wilson understands Tagalog or eats chicken adobo like I do. The shock and gratitude she displayed, and the tearful look of pure happiness from her Filipina mother as she watched her daughter rightfully claim her Grammy was a moment many of us identified and empathized with.

H.E.R. is currently on a European tour and is set to perform at Coachella 2019. Catch her at one of her upcoming shows: 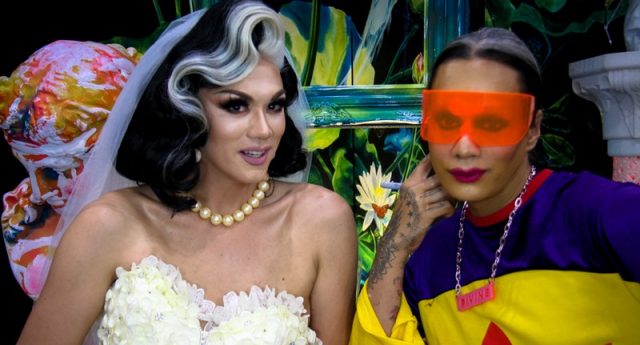 Mirror, mirror on the wall, who has the most charisma, uniqueness, nerve and talent of them all? These ladies certainly do. Drag queens are entertainers who boldly defy gender […]