Television is finally getting an Indian American superheroine.

The reboot of “Greatest American Hero,” an ABC pilot which comes from “Fresh Off the Boat” showrunner Nahnatchka Khan, will star Hannah Simone in the leading role.

According to the Hollywood Reporter, the comedy series will “follow Meera, a 30-year-old Cleveland woman whose talents include drinking tequila, singing karaoke and not much else.”

“All that changes,” the show description reads, “when some aliens entrust her with a super suit to protect the planet.”

Simone, who will play Meera, is best known for her role as Cece Parikh, a fashion model and best friend to Jess, on the Fox series “New Girl.” The show looks to wrap up for good this year after its seventh season begins in April.

On Monday, sharing the news with her followers, Simone wrote on Instagram: “Believe it or not, I’m walking on air,” with the hashtags #femalesuperheroofcolor and #thechangeishappeningpeople.

Khan, who is Iranian American, has had a long relationship with the network, having created “Don’t Trust the B— in Apartment 23.”

The original version of “Greatest American Hero” aired on ABC for three seasons in the early 1980s, with William Katt playing the hero. 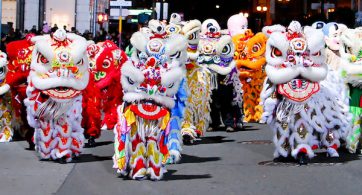 Gung hay fat choy! The Lunar New Year, which officially begins Feb. 16, will trigger festivals and parades across the U.S. as millions welcome the Year of the Dog. […]