Longing glances, moonlit ballrooms and lost loves are all par for the course when it comes to period dramas. And no one is quite as good as Jane Austen at evoking the subtlety of romances during the Regency era, which makes Netflix’s remake of Austen’s last novel, “Persuasion,” all more exciting.

The forthcoming Netflix original stars Dakota Johnson as the melancholy spinster Anne Elliot, struggling between love and familial obligations. But her life is thrown into chaos with the sudden reappearance of her former fiance, Captain Frederick Wentworth (Cosmo Jarvis). Once a poor bachelor, Wentworth returns from the Napoleonic Wars as a rich sea captain now looking for a wife. Not only must she deal with her former flame, Anne must also handle her family’s misfortunes as they grapple with unexpected poverty and the arrival of Mr. Elliot (Henry Golding), a distant cousin and heir apparent to Anne’s father’s title and land.

“Persuasion” is set to premiere on Netflix on July 15 of this year, with renowned British theater director Carrie Cracknell at the helm. Other cast members include Richard E. Grant, Suki Waterhouse and Edward Bluemel.

While an official trailer has not been released yet, we can all enjoy these first-look photos in the meantime. 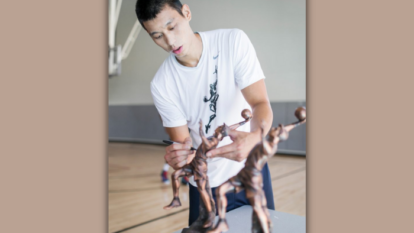 The NBA-affiliate company will create original content focusing on sports and entertainment.