We’ve seen record-freezing temperatures in the U.S. these past few months, but fortunately, spring has officially sprung.

In anticipation of warm weather and blooming flowers, these Asian fashionistas are here with the latest spring trends. Time to get inspired and cop your next fit.

Here are the top five Asian fashion influencers you need to be following:

Aimee Song has accomplished what many of us can only dream of: she’s created a lucrative business simply with her social media presence. Often spotted partying at Coachella and striking poses in Tokyo, Song travels the world of luxury to promote clothing brands. How’s that for a crazy rich Asian? Despite having risen to mega-influencer status, she brings her fans into the exclusive world of fashion through her YouTube channel, Instagram and of course, her claim to fame, the fashion blog Song of Style. With her advice, you’re sure to look fabulous this spring!

Jenn Im boasts a following of over two million on her YouTube channel, ClothesEncounters, and for good reason. Having grown up thrifting for unique looks, she has a few tips and tricks to pass on that’ll have you feeling expensive without breaking the bank. But she’s more than just a casual vlogger. In 2017 she launched EGGIE, a clothing brand featuring clothing she designed herself! Her currently featured outfits are retro and chic, a definite spring mood.

Chriselle Lim hit the digital fashion scene after her friend Michelle Phan pushed her to start her own channel. Full disclosure: Lim has worked for CHARACTER in the past as a stylist. Since then, the Korean American entrepreneur has single handedly built a digital fashion empire with a loyal social media following of over two million. What’s more, she’s recently released her very own spring collection at Nordstrom, Shopbop and Bloomingdales, which she shares in the video above. Whether you’re looking to up your outfit game for the office or go out and catch some sun, Chriselle Lim has you covered.

Who said every fashion influencer needs to have over one million followers on Instagram? Susie Lau is not your typical digital fashion influencer. A brutally honest and creative voice in the fashion world, she often writes for high-profile publications like Vogue, Elle and The Guardian. What’s more, Susie Lau runs a popular fashion blog, Style Bubble. There she not only shares her personal style tips and observations, but also spotlights emerging designers who can further inspire your next spring outfit.

Us guys need some inspiration, too! Many of us remember Peter Adrian from when we’d endlessly scroll on Tumblr or Lookbook. He had the dashing good looks we either envied or swooned over (or both) and has an attractive sense of style to match. Today, the Chinese American influencer co-runs the popular blog “The Hobbyist” with his brother Yoshi Sudarso, where he showcases outfits any man could achieve with a simple trip to the mall. 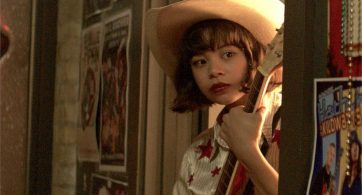 The legendary Yellow Rose of Texas… is Asian? At least at the 35th annual Los Angeles Asian Pacific Film Festival, she will be. This year, LAAPFF will kick off […]