It’s 4:30 a.m. when Randy Ribay wakes up. He walks his two “mystery breed” dogs, the mischievous Loki and the pointy-eared Arwen. Once his four-legged friends get their morning exercise, Ribay gets to business on one of his lines of work: writing. An hour and a half later he showers, gets dressed and commutes to his other job, teaching English at a Palo Alto high school.

Ribay has already been very productive with his creative career. The Philippines-born, Midwest-raised author has published two novels, “An Infinite Number of Parallel Universes” and “After the Shot Drops.” Ribay’s newest, “Patron Saints of Nothing,” hit shelves on June 18. The book examines the Philippine drug war through the eyes of Filipino American college student Jay Reguero, who is forced to re-evaluate his heritage after his cousin Jun is killed in an act of vigilante “justice.”

Ribay has always loved storytelling. But growing up as a mixed Filipino American, he had a hard time finding literature that reflected his experiences. Books and stories about Filipino Americans could be counted on one hand—well, less than one hand, really. He recalls reading a lot as a kid and being engrossed in series like “Goosebumps” and “Encyclopedia Brown”—stories Ribay describes with a laugh as “white boys on adventures type of stories.” But he skipped his own young adult literature phase and graduated directly from R.L. Stine to Stephen King.

His first brush with YA actually came when he was an English teacher. On his quest to get his students engaged in reading, he familiarized himself with the genre. But it wasn’t until he was working on his master’s at Harvard, where Ribay took a course on young adult fiction, that he was floored by the category’s surprising quality and depth. So, he set out to write his own tale. “I wrote a very terrible YA zombie apocalypse novel,” Ribay says. “In my defense, it was before ‘The Walking Dead’ was on the air, so I can be a bit hipster with it.”

Unfortunately, no publishers took the bait for his undead story, so Ribay went back to teaching. But every summer break Ribay would write another young adult novel and pitch it. After multiple rejections, his hard work paid off. It happened at Pitch Slam at the Writer’s Digest annual conference, or as Ribay describes it: “speed dating.” “You have three minutes to pitch your work to this agent, then they ring this bell and your time is up,” says Ribay. “And that pitch became my first book, ‘An Infinite Number of Parallel Universes.’”

Ribay has become more ambitious with his third novel. In “Patron Saints,” Ribay grapples with big questions, asking, what does it mean to be Filipino American? “A lot of times, you feel like you have a foot in these different worlds, but don’t fully belong in either of them,” Ribays says. “It becomes this feeling of insufficiency … like, ‘I’m not American enough, but also I’m not Filipino enough.’ That’s what I wanted Jay to be struggling with throughout the story. He gets that from me, very directly.”

He’s hoping the book will provide the representation for Filipino Americans that he longed for as a child. Looking back, he saw “Saved by the Bell”’s Zack Morris as the quintessential all-American boy. Only later did he learn that Mark-Paul Gosselaar, who played Morris, was of mixed Indonesian descent. “I was looking at this character who I thought was fully white, and I thought, ‘If only I could look like that or have that kind of hair.’ And all the while he was just made up to be white,” Ribay says. “How much of a difference would that have made for me, emotionally, if that character was half-Southeast Asian, half-white?”

Now, Ribay is applying that audience-based method of thinking to his own writing. “It’s part of my philosophy that no kid really hates reading. When they say that, they probably just hate the books put in front of them,” Ribay says. “It’s important that [‘Patron Saint’’s] target audience is the Filipino American teenager. I hope it can help someone grow, help someone figure who they are, at a time they need it the most.” Now, Ribay’s lessons will no longer have to be confined to the walls of a classroom. 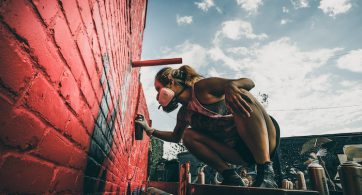 Allison Tinati’s alter ego, Hueman, is a reflection of the art she creates. The play on hue and human is “a celebration of diversity,” explains the Filipino American artist […]