Allison Tinati’s alter ego, Hueman, is a reflection of the art she creates. The play on hue and human is “a celebration of diversity,” explains the Filipino American artist from her Oakland art studio. “We’re all people of color, and the idea of being human is universal.”

Tinati originally took the moniker because she wanted her art to “live as its own entity,” but as a woman of color in a predominantly white, male art world, she stands out whether she’s crushing a 30-foot mural in Haiti or exhibiting in a fine art gallery in France. “Everything I face as a female artist has more to do with being a female, in general,” says Tinati, who refuses to hide her femininity. “If I’m painting outside in the heat and I’m wearing short-shorts, someone will be like, ‘Ooh, booty shorts!’ No. I’m just wearing shorts. It’s hot!”

Equally adept at working on canvas or concrete, Tinati walks a fine line between street art and fine art. She works primarily in spray paint and acrylics to create visual poetry in motion.

Her use of candy-colored hues and surrealist forms is a dreamy mash-up of the abstract and realism that she dubs “etherealism.” “I want to re-create the moment between sleep and wake,” says Tinati, whose work includes Pink’s “Hurts 2B Human” album cover, which debuted at No. 1 on the Billboard charts in early May. “I like how things emerge and fall back to reveal themselves.”

Tinati’s natural talent shined when most kids are struggling to stay within the coloring lines. “My mom has photos of me at 3 drawing on stuff,” says Tinati, who had her first gallery show at 18. While her parents were supportive of her passion, they also saw her struggle after graduating from UCLA’s Department of Design Media Arts. “Being Filipino, they were like, ‘Are you sure you don’t want to be a nurse?’”

A life-defining moment came when she told her mother that she was going to pursue art full-time. “I was wondering when you were going to do that” was her mom’s unexpected response. “Being an artist is hard, but hearing that your parents are on your side is a huge deal.”

Tinati has overcome her own fears and doubts to not only survive but thrive. She’s collaborated with Nike, North Face and Disney. Her shimmering art pieces can be found on mural walls and gallery walls across the globe. Now, she’s focused on her masterpiece. “I’m giving birth to a human,” says the expectant mother. “I’m thinking about life in a new way.” 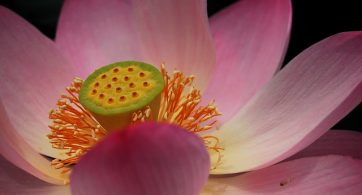 National Simplicity Day was created to honor transcendentalist philosopher and author Henry David Thoreau, who encouraged a life within nature, away from material needs.  The holiday seems more relevant […]