At 2 p.m. on Aug. 17, an eager crowd of fans screamed in excitement as they swarmed to the front lines of an empty red carpet backdrop. “What’s happening here?” a young fan asked. “N. Flying is making an appearance at 4 p.m.!” the crowd responded. The fan shrieked in delight at her luck. At KCON LA 2019, a two-hour wait to catch an up-close glimpse of your favorite K-pop band was like winning the lottery. Or one of the event’s $1800 tickets.

This year’s KCON convention in the Los Angeles Convention Center was filled with devoted and diverse K-pop fans from all over the world who bonded with each other through fan club meetings, lip sync battles and the infamous K-pop dance game—GoToe’s Random Play Dance. While waiting for N. Flying’s arrival, Southern California residents Taylor and Lenena (who prefer to be identified by their first names only) engaged in an animated conversation as if they were friends for years.  But in fact, they’d only just met that day through their mutual love for N. Flying, a four-member Korean rock band and one of the many artists who performed on Sunday night’s (Aug. 18) KCON concert.

“This is my sixth year at KCON, and I came for N. Flying,” said Lenena. “I come to KCON for all the Korean products they sell, to see my favorite groups and to meet new people who love K-pop like me.”

Indeed, KCON is exactly the place to do all those things. From Korean beauty brands such as the popular Olive Young to Korean dessert melon bar company, Melona, attendees could sample and buy a plethora of Korean products ranging from acne cleansers to instant ramen. At the KCON Beauty section, makeup tutorial demonstrations and panels were held for hardcore beauty gurus while on the opposite side of the hall, vloggers from popular YouTube cooking channels taught attendees how to make their favorite Korean dishes.

But shopping isn’t the only thing worth promoting about KCON. It’s also the one place where fans can meet rookie K-pop artists, groups and trainees who could very well be the future headliners at KCON. At the KCON stage, a line of 20 male K-pop trainees introduced themselves and showed off their talents (rapping, singing, dancing or performing explosive acts of “aegyo” for screaming fans) in hopes of establishing an international fanbase even before they debut with their respective management companies. Recent debuts such as rookie groups ATEEZ and Iz*One grabbed the attention of surprised attendees as they wandered throughout the convention hall, promoting sponsored products and interacting with fans.

KCON has become more than just a space to promote artists and Korean products, or to unite K-pop fans from all over the world. This year, KCON used this space to explore and tackle pressing issues in the K-pop community, with panels such as “K-Pop and Mental Health: A Conversation” and “Black American Music and K-Pop.” KCON also highlighted the importance of representation for Asian Americans and the LGBTQ+ community within the K-pop industry.

Asian American actor and YouTuber Mike Bow—known for “The Maze Runner” and his online sketches with Wong Fu Productions and LeendaDProductions such as “Asian Bachelorette”—was in attendance at his fourth KCON as a host of the K-Pop Lip Sync Battle. He talked to KCON attendees about his career as an Asian American actor and how K-pop plays a role in it. “I’m now doing more K-pop related things. I just did a commercial with Amber from f(x) and it’s been really fun,” Bow said. “As an Asian American actor, I’ve faced a lot of adversity growing up. A lot of the roles played by Asian Americans were stereotypical roles. Now recently, thanks to Wong Fu and “Crazy Rich Asians,” all those roles are starting to actually change with better representation for us.”

Meanwhile, drag culture was represented at KCON by Korean drag queen and former contestant of RuPaul’s Drag Race, Soju. At a panel with Internet personality Chester Lockhart, Soju revealed her experiences performing in South Korea. “I was in Korea performing in Itaewon in 2017. I was so surprised by how big the drag culture has become in Korea,” Soju said. “This was before I was on [RuPaul’s] Drag Race. I’m really happy to see this shift in taboo-ness of being queer [in Korea].” When asked if she felt the same level of acceptance at KCON, she enthusiastically replied, “I feel the love at KCON!” to a crowd of cheers.

“It’s really incredible. This is my first time doing anything big at KCON. I’m working with a lot of staff members from Korea that are from Mnet and CJ Entertainment,” Soju said. “And the level of respect they give me as an artist, I never expected this. I thought they would all dodge me… But they were really loving and tried to work with me and make me feel comfortable.”

Needless to say, from devoted fans to hopeful trainees to beautiful drag queens, everyone could feel the love at KCON. 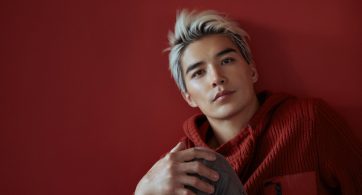 Hold onto your hats, Ludi Lin fans. It looks like the “Power Rangers” actor is gearing up to kick @ss at a theater near you. Rumors have circulated within […]