On opening night of the Los Angeles Asian Pacific Film Festival, one slim figure towered above many of her fellow actors and filmmakers on the yellow carpet—Chinese American actress, Celia Au. Her heeled sneakers and bangs (styled in a poofy, floating mohawk) gave her a few added inches. Wearing glittery gold pants and an “It’s An Honor Just To Be Asian” tee, Au showed off a perfected pout for the flashing cameras.

A few months after the LAAPFF premiere of her feature film “In A New York Minute,” Au hasn’t gone far from the spotlight. She plays a crucial role in the Netflix martial arts drama “Wu Assassins,” which releases on Aug. 8. Though details about the show have been kept under wraps (in typical Netflix style), Au says she plays the original Wu Assassin, Ying Ying, who’s tasked with training the newest Assassin, Kai Jin (Iko Uwais), to keep the Wu Xing powers out of the hands of triad gangsters.

With spoiler embargoes in place, Au can’t reveal much more about the show, but adds that she’s impressed by the dedicated fans of a TV show that hasn’t even debuted yet. “[Netflix is] trying to hide everything, but I’ve been looking online and some of the fans have compiled some really interesting stuff,” Au says, from her home in New York City. “They’re already writing ideas of what’s happening, who’s playing what, looking at the break-downs of the casting, the pictures we’re posting. You guys are detectives!”

But, long before she was playing a mentor, Au was a student. She attended business school in New York, where she took an elective acting class. The class itself didn’t pique her interest, but a conversation with her professor did. “I was just curious, and I asked my professor how one becomes an actor and makes money. Honestly, if he’d given me an answer, I’d have been like, ‘Okay, cool,’ and moved on,” Au says. “But he said, ‘I don’t know. If I knew, I wouldn’t be teaching here right now.’ I actually talked to him about it years later, he says he doesn’t remember saying that.”

Au was hooked on the vagueness of his reply, so she began to do her own research into acting careers, just to find out how it all worked. She wound up landing her very first acting gig as a background extra on HBO’s “The Sopranos,” where she “sat there for like, 16 hours” and got paid about $85. But the long hours weren’t for nothing. One of the actors on set, John Wu (“Blacklist”), noticed her—or rather, Au noticed him. “I didn’t know who he was,” Au says. “I didn’t know you’re not supposed to talk to people.  I just saw he was an Asian guy and I said, ‘Dude, this sucks, this is so boring.’ And he was like, ‘Yeah, because you’re a background actor.’ I had no idea what that was.”

Au trails off into a self-conscious giggle as she recalls her first days of acting. Wu introduced Au to his agent, who requested that she send in a resume (Au sent her work resume) and a headshot (she supplied a high school graduation photo). Still, with a little guidance from Wu and some elbow grease, Au managed to book a role in a music video. She spent two days just “running around Chinatown,” and from there Au knew that she wanted to act for a living. A series of small roles in TV shows like “Gotham,” “Madame Secretary” and “Iron Fist” followed. But Au didn’t abandon her business school roots. “I studied advertising and marketing in college, and it really taught me how and why packaging is so important,” says Au. “When I started acting, I was looking around at all of the other Asian actors, and I realized, ‘Wow, we all share a very similar style.’ So, from a marketing standpoint, what will make me stand out?”

You guessed it—that impressive, gravity-defying hairstyle, and her flashy sense of style. “I designed this haircut: spiky in the front, and long in the back. And so at the beginning, people were like, ‘Oh, who’s this kid with the mohawk?’” Au says. “Then I started wearing skinny ties, and people were like, ‘Oh, it’s the kid with the skinny tie and the mohawk, let’s call her in.’ And then eventually it became, ‘Let’s call Celia in. This is Celia.’ I built a brand, an image that stood out, so people would ask who I am.”

That hairstyle has carried over to her character on “Wu Assassins.” Au says her role as Ying Ying is “the first time I’ve felt close to being a superhero.” For Au, who grew up watching “The Power Rangers” and idolizing Yellow Ranger Trini Kwan (Thuy Trang), it’s a pretty big deal. “Dude, the Yellow Ranger, that was the only one I could look up to as a kid. She was my only superhero,” says Au. “We need more characters like Trini on TV or in movies that can inspire kids to be like, ‘Oh, that’s me! That could be me on screen.’ I feel like we’re going toward the right direction. We’ve just got to keep pushing and get support, because as long as there’s support, nothing can be defeated.” 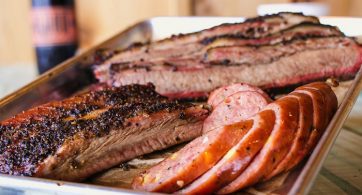 In the back of a restaurant located in an inconspicuous strip mall in Bellaire, Texas, a small chimney is puffing away a steady stream of post oak and pecan […]