In the back of a restaurant located in an inconspicuous strip mall in Bellaire, Texas, a small chimney is puffing away a steady stream of post oak and pecan smoke. Inside, three best friends toil away on their day off, feeding casing into a sausage-stuffing machine while old-school rap blares in the background. Tomorrow, those hot links could be served up next to a bánh mì sandwich and paired with gochujang beef belly burnt ends. Or maybe just eaten with some good old-fashioned Texas dry rub brisket. Hold the sauce, of course.

Blood Bros. BBQ is one of Houston’s newest barbecue joints to break onto the city’s competitive smoked meat scene. The restaurant was founded in December 2018 by brothers Robin and Terry Wong and their friend Quy Hoang. Robin is usually in the kitchen, Terry likes to post up at the front of the house, while Hoang is set up on the cutting station. Though they’ve only been open for about seven months, they have already established themselves as a Houston institution, having been featured in “Texas Monthly,” the “New York Times,” as well as on ABC’s “Localish.” Why? Well, because the trio is … Asian. And Hoang happens to be Houston’s first-ever Vietnamese pitmaster. The three are serving up traditional Texas-style barbecue (think brisket smoked in an offset smoker for over 12 hours, hand-stuffed boudin and melt-off-the-bone pork ribs) but with a bit of Asian flare.

Despite what most people from outside the great Lone Star State might think, H-Town is actually known for its large Asian presence. After World War II, Houston’s Chinese population grew from a measly 121 residents to a whopping one thousand, many immigrating from other areas of the American South to seek opportunities in the city’s growing economy. Then, in 1975, when Saigon fell, the federal refugee resettlement system designated the metropolis as a “major resettlement site” for the fleeing Vietnamese. Almost overnight, Houston’s Viet population exploded from less than 100 residents to over 25,000.

The Blood Brothers see themselves and the grub they serve up as a product of this legacy of immigration. They grew up in Alief, a suburb of Houston near Chinatown. They rattle off the different ethnicities they grew up around, like Bubba from “Forrest Gump” rattling off shrimp dishes. “Indians, Mexicans, black folks and every kind of Asian. Vietnamese, Laotians, Filipinos, Chinese, Thai, Korean,” Terry says. “The whole nine. We’re really lucky. Armenians, even.”

The trio have been friends since they met at Elsik High School (which Beyoncé also attended, by the way). Robin says growing up in “the hood” gave them a unique outlook on life. “That was the great thing about growing up in Alief,” Robin says. “Everybody was pretty much middle to lower class. So, there wasn’t really that whole ‘I’m better than you’ thing. And we always joked that everybody in Alief grew up with the hustler mentality. Whether you were an honor roll student or a dropout, everyone was hustling something.”

The barbecue restaurant isn’t these good ol’ boys’ first endeavor into the food service business. Blood Bros. BBQ actually originated as a result of “steak night” at their club, Glitter Karaoke, where the Wong brothers recruited Hoang to take over the meats. Soon, steak night evolved into a pop-up trailer, which then became their brick and mortar. Before he partnered with the Wong brothers, Hoang worked at his uncle’s aquarium shop. “I used to grill in my backyard all the time,” Hoang says. “But, I used to joke around that I wasn’t about to spend 12 hours a day sitting around a pit cooking barbecue. Then when we started the steak night, I was like, ‘Y’know, today’s the day. I’m gonna sit down and see if I can do this.’ From there I just got kind of hooked on it, the whole process of it.”

Despite their commitment to traditional smoking methods, the trio say that they’ve taken liberties on the hard-nosed definition of what “Texas barbecue” is. The three make it clear that they are making authentic Houston barbecue. “Besides our traditional style barbecue, everything else is just experimenting with different flavors we grew up eating in and around Houston,” Robin says. “We take pride in what we do, so we try to make everything from scratch in a way that’s 100 percent unique to us. It’s just weird because it’s evolved into something bigger. We’re not just Blood Bros. BBQ representing Houston. We’re Blood Bros. BBQ representing Houston and the Asian community.” 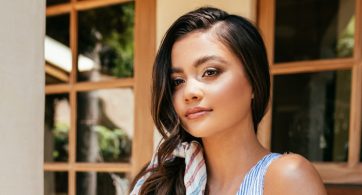 Thousands of miles across the Pacific Ocean, a warm and enthusiastic “Hi!” from 14-year-old Siena Agudong breaks the silence on the other end of the phone connection, like a […]