After 30 years in the entertainment world, the Basco brothers (Dante, Darion, Dionysio and Derek) have finally united on screen. The four also came together at the 2021 Los Angeles Asian Pacific Film Festival to spill on how their new feature, “The Fabulous Filipino Brothers,” is an ode to family and love.

The film follows the antics of four Filipino brothers as they prepare for an upcoming wedding in the Bascos’ real hometown of Pittsburg, California. In a series of four vignettes, each brother must navigate rocky romances, familial expectations and the Filipino American identity. The feature is completely a family affair, marking Dante’s directorial debut and co-written by Darion, Dante, Dionysio and their sister Arianna. “The Fabulous Filipino Brothers” premieres today, Feb. 8, on Amazon Video and Google Play.

All four brothers joined forces last fall to explain the film’s significance, as well as the unique experience of working with loved ones. Every relative in the film is portrayed by actual members of the Bascos’ extended family. In particular, the brothers reminisced over humorous anecdotes about working with their parents for the first time.

“Working with our parents was fun,” Derek said. “As we started working, they wanted more lines.”

The brothers agreed, all mentioning how funny it was to see their parents taking their roles so seriously. “That was surprising for my dad, as he doesn’t speak that much,” Darion added. “But as we started filming, he wanted more lines.”

Dante went on to speak about his experience as a first-time director, noting that while he has produced multiple AAPI-led films in the last decade, like “Empty by Design” and “Hang Loose,” this was his first time taking on the directorial role. “I just tried to do what I tell young filmmakers out there, write what you know,” he said. “And work with the best actors you can work with. My brothers are right there.”

The brothers also discussed the positives of working with each other, and described the uplifting atmosphere of filming with their whole family. Watch the video above to see the full interview with the Basco brothers! 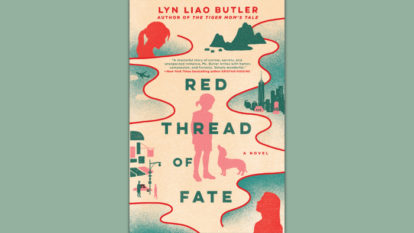 The second novel from “The Tiger Mom’s Tale” author Lyn Liao Butler does focus on love, but maybe not the kind you expect.