Filmmaker Alice Wu made headlines back in 2004 with her debut feature, “Saving Face.” Despite having what mainstream Hollywood might describe as a niche premise, the movie’s innovative storyline and representations of the LGBTQ community and Asian America created an instant hit that’s since been celebrated as a classic lesbian film. Eager fans were already clamoring for Wu’s next release.

But then, the director disappeared from Hollywood’s headlines for over a decade.

In early 2019, news began to circulate that Wu was back, and she’d brought another queer-centric film with her. Though scant information was available at the time, early descriptions compared the project to the French play “Cyrano de Bergerac,” in which Cyrano writes and sends poems to his beloved under another suitor’s name because he’s embarrassed of his large nose. But in this case, the Cyrano was to be a shy, closeted Chinese American teen in rural Washington, who’s commissioned by a bumbling student athlete to write love letters to the girl they’ve both fallen for.

Wu’s fanclub, which had been patiently waiting in the wings, latched onto those few details with a vengeance. “It was wonderful and a little scary, to be honest,” Wu says, on the phone from her home in California’s Bay Area. “I’ll get these tweets and DMs, someone actually wrote, ‘I trust Alice Wu to give all the gays everything we want.’ I’m such a relationship ding-dong, I can barely figure out how to give one gay most of what they want, let alone all gays everything they want.” Wu laughs, recounting her surreal experience of seeing “Saving Face” viewers unexpectedly emerge in droves. She still sounds a little incredulous, as if unaware of the staying power her debut film has had over the past 16 years.

Which, as it turns out, she mostly had been. Her mother (for whom “Saving Face” was created) fell seriously ill a few years after the movie premiered, and Wu dropped everything to move back home and take care of her. “I left the industry entirely 10 years ago, and I only just got pulled back,” Wu says. “In between, I wasn’t paying attention to it at all.”

Just before Wu left the film world behind, she was told by a well-meaning agent that her next project “had to be white and couldn’t be gay,” the very conventions she had refused to accommodate as a first-time filmmaker. But in the intervening decade, Tinseltown’s long-standing ideals (and those of the world at large) finally began to shift. Same-sex marriage was legalized across the United States in 2015, in addition to projects like “Fresh Off the Boat” finding the commercial footing to portray Asian Americans in a new light.

Wu couldn’t have timed her return better. She finished the script for what would become “The Half of It” and began seeking financing just a few months before the 2018 premiere of “Crazy Rich Asians.” “Just as we were heading into making it, all of a sudden it was like Hollywood discovered diversity,” Wu says. Though the production of “Saving Face” was plagued by requests to alter crucial aspects of the film’s plot, Wu found the path to create her second film much less obstructed. “It’s this really wonderful time right now, where the moment [producers] hear the lead is Asian it’s not just an automatic, ‘Okay, never mind.’ This time around I wasn’t asked, ‘Can you make your main character white?’ which I thought I was going to get a lot.”

The role of the main character instead went to actress Leah Lewis, who stars as Ellie Chu, a quiet, straight-A student who makes extra cash by writing her classmates’ papers and the occasional love letter. This was Lewis’ first time leading a feature film, but luckily, she explains, Wu helped calm her nerves. “Any time [you’re] stepping into a role like that, where the story revolves around them, can be very scary,” Lewis says. “But having Alice by my side as the person who wrote this, lived this, in one way, assured me to have no fear. We were able to walk through this hand in hand.”

There were a few extra steps in that journey to bring Ellie to life. At the same time as filming her series “Nancy Drew,” Lewis studied Mandarin Chinese and practiced her lines on the set of the CW drama. “Everyday it was Mandarin, Mandarin, Mandarin, and then twice a week I would meet up with a Mandarin coach,” Lewis says. “That was a bit of a struggle for me, but I wanted it to be true to story.” But Lewis didn’t spend all her time brushing up on her language skills. Over the course of filming “The Half of It,” Lewis and her co-stars Daniel Diemer (Paul Munsky, the jock who enlists Ellie’s help) and Alexxis Lemire (Aster Flores, Paul and Ellie’s mutual love interest) became close friends, which translates to the sparkling on-screen chemistry you can see in the finished movie.

Wu helped encourage the actors’ real-life relationships, too. When filming an especially significant moment between Ellie and Paul, the director pulled both Diemer and Lewis aside privately and asked the actors what they both wanted one another to achieve in life. When the cameras rolled, Wu surprised them both with each other’s best wishes. “I lost it, what [Daniel] said was so beautiful,” Lewis says. “I was in tears, I was wrecked. And that was just one of the many examples of Alice really getting in there and using our real-life experiences and what we go through.”

That bond between castmates helped solidify what Wu describes as the underscore of the film. Without giving away too much of the plot, for the most part “The Half of It” isn’t actually about romance. The beating heart of the movie is instead platonic love. “We tend to exalt romantic relationships as the most important thing, like finding your other half,” Wu says. “That’s just a wonderful piece of love, but it’s not better or worse than all the other forms, like the love you have for your parents, the love you have for your friends. And for me, that’s ultimately what the film is about, recognizing how many different ways there are to love.”

As most of us shelter in place, the film is the perfect, uplifting watch-from-home that so many of us need right now. Lewis notes that in these tough times, the film can also impart a message of hope for viewers in isolation. “I hope that they see a little bit of themselves in it,” she says. “Whether that be Ellie finding her way through her sexuality, all three characters finding their way back to their families, or all three characters finding love in the most unexpected places in friendship, in each other, I just hope people feel seen.”

But even more importantly, it’s not just Asian Americans and LGBTQ audiences who can see themselves represented here. Through Ellie and her classmates’ lives in a small, conservative town, “The Half of It” presents a second, less obvious narrative about our deeply divided nation. “I wanted to say something subtle about being an immigrant or an other in a place like this,” Wu says. “But also, someone can have certain attitudes and still be a very good person. If I can get a 55-year-old straight, conservative white guy to identify with a 17-year-old Chinese American girl, or maybe her 50-year-old immigrant father, then I’ve won. Any time I can increase the human capacity for empathy, that’s my goal as a storyteller.”

All goals aside, as the film’s premiere approaches, Wu opens up about her true feelings of anxiety for “The Half of It.” With great acclaim comes great expectations, which the filmmaker is more than aware of. “I’m literally terrified that I’m setting everyone up for mass disappointment,” Wu says, with a laugh. “Let’s hope it goes okay.” But based on the early rave reviews, it looks like Wu has nothing to worry about. The entertainment world, not to mention all of those dedicated fans, have been waiting all these years to welcome her back. 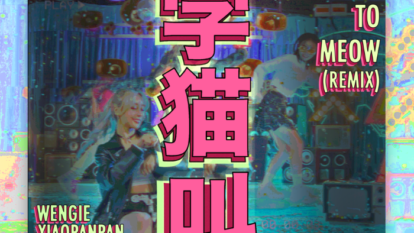 International viral hit “Say Meow Meow” is back for a revival! The EDM remix of the hit single, “Learn To Meow” is a collaboration released by original musicians as […]