I blame the puppy.

I had originally planned on meeting Steven Yeun, star of Frank Darabont’s newly christened television hit The Walking Dead (AMC), at a certain restaurant in Los Angeles K-town known for its gopchang. What better way to discuss his work on the show adapted from Robert Kirkman’s acclaimed graphic novel series about a zombie apocalypse than over a plate of grilled intestines?

Instead, we’re sitting in the patio of Holly’s Coffee with Agnes—a damned adorable jet-black Labradoodle—because Steven’s friend wasn’t home when he tried dropping the bitch off. Coincidentally, this friend that was supposed to dog-sit Agnes during this interview is the same guy that introduced Steven to The Walking Dead graphic novels five years ago. So, actually, in a sense, I have that guy to thank (and blame) for us being here, starving for entrails.

Only days before, AMC had announced that it would renew The Walking Dead for a 13-episode second season after its Oct. 31 premiere drew (pardon the pun) monster numbers, setting a record for the most-watched debut among adults, aged 18-49, in cable television history. So for at least the  foreseeable future we may be seeing a lot more of Steven on this postapocalyptic horror television series as Glenn, the former pizza delivery boy with a chip on his shoulder who survives menacing zombies through sheer guile and craftiness.

Steven landed the coveted role after being in Los Angeles for only a year, having cut his teeth in Chicago’s renowned Second City Theater and Steppenwolf Theatre Company. Born in Seoul, he initially immigrated with his family to Canada at the age of 5, eventually ending up in Troy, Mich. His father owns a pair of beauty supply stores in nearby Detroit, geared toward African Americans. (Incidentally, if you are curious about a “10-inch Yaki” or a “Silky Straight,” Steven’s knowledge of hair products is pretty unbe-weave-able.) After catching the acting bug as an undergrad at Kalamazoo College, his parents gave him a begrudging nod to pursue his passion. Luckily, his gamble paid off. If Steven’s stock continues to rise along with the gory show, it probably won’t be long before he hires a full-time dog sitter.

But in the meantime, he’s relishing his good fortune while cautiously keeping it all in perspective.

You’ve only been in Los Angeles a short time, but you’ve already had a really good run.
It’s unreal. I’m super thankful. I can’t sit here and say it’s all me. It’s a bit of grace, luck and timing.

You were already a fan of the graphic novel before AMC started adapting it for television, so you knew that Glenn’s character didn’t have a whole lot of backstory. Did you have to create one for him?
I created a similar back story to mine. We both kind of have a chip on our shoulder.

Glenn, as far as I can tell, is pretty much the only Asian in the graphic novels and so far the only one on the show. What advice would you give Asians on how to survive the zombie apocalypse?
Dude, um, apparently according to the book, follow white people and you’ll  survive. Follow the nearest white guy and your chance of survival might be heightened. ( Laughs.) Or maybe the show hasn’t revealed it yet, but there’s a huge city of Asians where everybody has prospered underground.

What should be included in everyone’s zombie-preparedness kit?
One, a bat. Two, a pickaxe. Guns, if necessary, but if you can’t afford it then lots of Twinkies, SPAM, rice, non-perishables. Hormel’s no-bean chili…delicious. That’s all you need, man: SPAM, chili and weapons.

Your geek-cred was already established when you appeared as Sebastian on The Big Bang Theory (CBS). But now that you’re playing a character from one of the most acclaimed comic book series in recent history, your geek-cred is through the roof. Do you ever worry you’ll be too associated with Glenn if the show continues?
It’s any actor’s dream, man, to have a job for a long time. If we go that long—awesome. I’d love to be a part of it. And if [Glenn grows], I’ll be absolutely thrilled.

Judging by the message boards the fans have reacted really well to your portrayal of Glenn. In fact, there’s a thread on imbd.com where fans talk about how hot you are. How does it feel to suddenly be a sex symbol?
( Laughs.) I don’t think I’m there yet, man. Daniel Dae Kim’s got that down. That guy’s a good-looking dude.

Are you even on the market?
I have a girlfriend in Chicago. We started dating before I left. She’s a photographer. The plan is for her to move out here.

The show is shot in Atlanta with a large ensemble cast and an army of undead extras. It must have been an intense experience all around.
The zombies look ridiculous, man. Super-real. We literally had 200 zombie extras chasing us down the street. 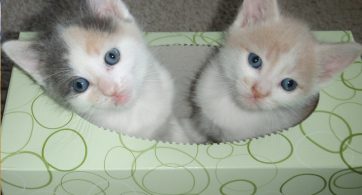 Update: Congratulations Rocio! Please email elizabetheun@charactermedia.com with your mailing address. We have a supah kyoot giveaway this week from the folks at I Can Has Cheezburger: a copy of […]