Big L once said “I’m so ahead of my time, my parents haven’t met yet.” For many of the rappers on our list, their parents (or grandparents or even great-grandparents) met ahead of their time. While artists like apl.de.ap and Anderson .Paak readily advertise their Afro-Asian backgrounds, they aren’t alone. Here are five rappers who rep Asian American heritage and black excellence:

On his 2016 album “Atrocity Exhibition,” Detroit-born rapper, Danny Brown asks listeners to “Tell Me What I Don’t Know.” Well, did you know that Brown is Filipino American? The eccentric wordsmith was raised by his Filipina grandmother, and grew up attending her Filipino American church. Keep an eye out, his fifth studio album is on its way!

Nicki Minaj, born Onika Tanya Maraj, is one of the most commercially successful rappers in recent memory. According to Minaj, her half-Indian father makes the best chicken curry in the world. Still, we’re not sure how we feel about her dressing up as Chun-Li…

In 2013, Tyga was king of the world. He was releasing hit after hit, and was featured several times in the reality TV series “Keeping Up With the Kardashians” during his relationship with Kylie Jenner. Today, “T-Raww”’s momentum has cooled off significantly, but he’s still making music. His mother, Pasionaye Ngyuen, is Afro-Vietnamese and was born in Vietnam.

Foxy Brown has been in enough rap beef to fill an AYCE K-BBQ menu. From Queen Latifah to 50 Cent, the hip-hop legend has never backed down from a confrontation. Born Inga Fung Marchand, Foxy is of Chinese descent. Since the 2000s, her career has been put on pause due to hearing loss, but her next project, “King Soon Come” will soon come this year.

Despite graduating from USC with a 3.6 GPA, Saweetie is no “Model Minority.” She’s one of the baddest female rappers in the game with tracks like “Icy Grl” and “High Maintenance.” In “High Maintenance,” she gives as a shout out to her mother, the “Filipina Queen.” She’s also considered to be one of the first ladies of hip-hop—she’s dating Migos’ Quavo. 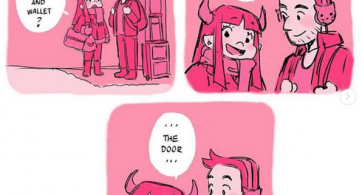 From a dark and starless dystopian China to the bright and star-studded streets of New York, webcomics can plunge readers into worlds that both test and tantalize the imagination. […]