From a dark and starless dystopian China to the bright and star-studded streets of New York, webcomics can plunge readers into worlds that both test and tantalize the imagination. Whether you’re looking for a laugh or a series to indulge in week after week, there’s something out there for everyone. If you’re new to the genre, the hundreds of choices across the web can feel daunting, so start your journey into the world of webtoons with our top seven picks by API artists.

Leehama’s breakout hit “Gourmet Hound” follows 25-year-old Lucy on her quest to rediscover the flavors of her childhood. Spoon at the ready, get ready to dig into this story chock-full of laughs and garnished with just a dash of drama.

Although she’s a newcomer to the webcomic scene, Lam is no rookie when it comes to illustration and animation. Currently a story artist at Glen Keane Productions/ Netflix, she graduated from CalArts with a bachelor’s of fine arts in character animation in 2018 and has been publishing “Succubishez” on LINE Webtoon since Jan. 2019. Based on the author’s own life, “Succubishez” follows a devilish caricature of Lam as she tackles life’s ups and downs.

Life inspires art in Wenqing Yan’s “Knite,” the story of a boy named Sen living in a dystopian China, whose only wish is to bring back the stars to the night sky outside his apartment. Tying together themes of hope and environmentalism, Yan weaves together a story that adds to the discussion about our impact on the earth. The webcomic originally ran 2010 to 2013, but “Knite” was recently rebooted with fresh illustrations and heavier themes—a reflection of Yan’s growth as an artist and activist.

Grab your trusty pink egg hoodie and buckle in for the adventure of a lifetime. From awkward encounters to life’s little victories, Lee perfectly captures the joy and surprise in the simple joys of life. When she’s not being a “cartoonist lady person,” Lee writes about the intersection of technology, art, music and culture for “The Verge” and can often be seen on the publication’s YouTube channel talking about her comics.

Considered an O.G. in the webcomic world, after 20 years of publication, “PhD Comics,” is still going strong. Based on Cham’s experiences as a grad student at Stanford and lecturer at CalTech, “PhD Comics” illustrates the struggles of life in academia. From thesis work to never-ending syllabus questions, the webcomic is full of hilarious material, relatable to both students and professors alike.

What’s life without a few laughs, relationship mishaps and, of course, cats? Park’s “MURRZ” portrays life through the eyes of a young adult just trying to get her footing in the world. Park also runs a personal YouTube channel where she vlogs, posts short animations, and talks about her cats, Beanz and Doobz.

Based in the Bay Area, Helmer is a self-taught artist who has worked with clients such as Sony, Disney, and Autodesk. Her first comic, “The Meek,” is set in a world on the verge of war and follows a colorful cast of characters including Angora, a naïve girl with extraordinary powers, and Luca deSadar, the fierce Emperor of the Northern Territories. Updating since 2008, and named one of the best webcomics of 2016, it’s a story you don’t want to miss. 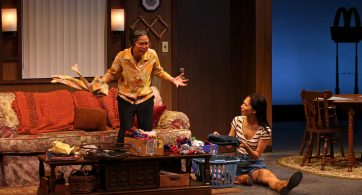 Surrounded by vague indicators of midwest America, like McDonald’s golden arches and a vintage Ford truck, Quang (Tim Chiou) leaps into action and punches out a racist cowboy who’s […]