An Indian American community group in Texas gifted a $100,000 check to Ian Grillot, the 24-year-old man who was shot and hospitalized after intervening to help two Indian men in a Kansas City bar shooting last month that killed one and injured another.

“I don’t know if I could have lived with myself if I wouldn’t have stopped or attempted to stop the shooter because that would’ve been completely devastating,” Grillot said, upon accepting the check from India House Houston.

The organization intends for the money to go toward a house for Grillot.

In February, a 51-year-old man, Adam Purinton, shot and killed Srinivas Kuchibhotla, an engineer, and injured Alok Madasani, another engineer, inside a bar they frequented. While trying to help, Grillot was also shot.

The shooter reportedly told Kuchibhotla and Madasani to “Get out of my country.” The incident is being investigated as a hate crime.

“It is not every day that one meets a genuine hero — a person who risks his life for another, and takes a bullet for a complete stranger,” said Jiten Agarwal, India House Houston’s gala chair, according to the organization’s Facebook page. “Ian Grillot is a man who reminds us of the promise of America and its greatness.”

A GoFundMe for Grillot, started by his sisters while he was in recovery, has already raised $473,000.

Another GoFundMe, for Kuchibhotla’s family, raised more than $682,000. “Srini was the kindest person you would meet, full of love, care and compassion for everyone,” the page reads. “He never uttered a word of hatred, a simple gossip, or a careless comment. He was brilliant, well-mannered and simply an outstanding human being.”

“Ian has given us an occasion to reaffirm a tie that binds us all as Americans, irrespective of where we come from,” Agarwal said. “This also reminds us of the famous Shakespearean quote: For he that sheds his blood for me today is my brother.” 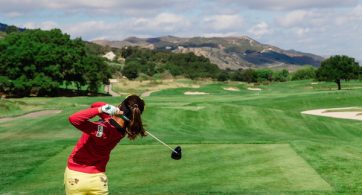 For the 11th year, the annual Kore Pro-Am golf tournament will be back on the green at Journey at Pechanga on April 2 and 3. Presented by Dura Coat […]