Last year, Day wrote the short film “Cowboy and Indian,” which has shown at film festivals worldwide. She plans to continue pursuing screenwriting and currently has three shows in development. “I’m excited and hoping to get more stories out there about brown girls and joining the revolution,” she said.

You’ve been involved in performing arts since a very young age. What brought you into acting?

When I was pretty young, I was putting on talent shows in my house for my family and friends, where I would use the bed as a stage and charge my parents 25 cents to come to the show.

When I was in middle school and high school, I started doing musicals. I tried out for track and cheerleading and didn’t make it. Then I tried out for the musical and got a small role in the ensemble. I had one line. Every time I said that line, the audience would laugh. After that, I said to myself, ‘I want to make people laugh like that.’

In what ways do you relate to the character of Sarah in “Insecure”?

To be honest. I’m not as mean as her. I’m not as shady. I don’t really relate to her. When you don’t do that in real life, it’s fun to channel that into a character and have people on Twitter say funny things like, “Why is Sarah being so mean to Issa?” It’s fun to play sort of a villain role. I would love to play more villains actually.

What are some ways your character as Sarah breaks stereotypes?

I think the entire show breaks stereotypes. What’s really fun about “Insecure” is that Sarah really could be any ethnicity. I think a lot of the roles in Hollywood, when you get a script, there’s no specific ethnicity tied to your character, but executives automatically assume it should be a white character. What’s fun is that this allows people of different ethnicities to just exist in a normal world.

In your career, how has it been being one of the few South Asian actors, and how has that changed?

There’s not a lot of us out there. I think it’s important for us to be in it together and not have a sense of competition. I started a Brown Girl Brunch. I’ve seen people in the community really band together and support each other’s work. I want that for South Asians in the industry.

What are some challenges you’ve faced?

You’re constantly hit with rejections no matter what race and ethnicity you are. What I did to counteract that was writing my own work. It has been really empowering to write and film my own work and be in a community that helps each other get things out there that have never been seen before.

How about challenges specifically as an Asian American?

After “Awkward Black Girl,” I never auditioned for stereotypical roles. Before “Awkward Black Girl,” I’d have to wear a hijab or play a Muslim girl or do an accent, but it was honestly few and far between, and I have not booked a lot of roles that are written for Indian American actors because Hollywood doesn’t think I look Indian enough. 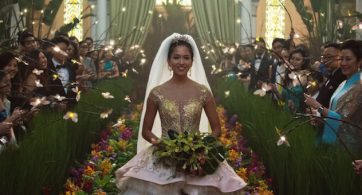