The Hollywood Reporter reported that the movie is the top showing for a rom-com since “The Proposal” in 2009, which earned $164 million. “Crazy Rich Asians” finished its three-week run with an estimated $117 million domestically. Warner Bros. raked in $28.3 million over the weekend — the best Labor Day showing since “Halloween” in 2007, according to Variety. And the movie has become the the most successful live-action comedy domestically, regardless of genre, since 2017’s “Girls Trip.” It is only the fourth film this year to top the box office three weekends in a row, following “Avengers: Infinity War,” “Black Panther,” and “Jumanji: Welcome to the Jungle.”

The film’s director shared his excitement in anticipation for the movie’s projected numbers.

I’ve been getting box office updates all night and it just keeps getting better Unreal. I’ve never been more happy with less sleep. Thank you to everyone who is showing up AGAIN and bringing their friends!! We could break another historical record by Monday if this keeps up. https://t.co/fvd1UOoAq1

When the weekend concluded, Chu was left speechless.

Wu, who plays lead Rachel Chu, poured out her gratitude to all who were involved with the film.

Nick Young himself highlighted one of the several accomplishments from the weekend.

The British actress, who shines as Astrid Young Teo, thanked the public and shouted out her next stop in London for the film’s red carpet premiere.

Third weekend at No. 1 and best Labor Day weekend in a decade.

The response has been beyond anything we could have imagined, thank you so much

Pang, whose character Colin Khoo held the wedding of the century, succinctly summarized his feelings.

Santos stole the show as Nick’s fashion-forward cousin Oliver T’sien. He tweeted his appreciation for the continuous support.

Crazy Rich Asians 3rd weekend as the No. 1 movie in the world.
Best Labor Day Weekend in a Decade. $111M domestically in 17 days. #crazyrichasians pic.twitter.com/PGyTv8qe2G

100 Million+ thank you for all the love have a blessed Labor Day #crazyrichasians @CrazyRichMovie @DEADLINE pic.twitter.com/SVs97x6Rqo

The actor made a brief cameo in the film to set up for his role as Charlie Wu in the sequel. He also took to Twitter to share the impressive box office stats.

Biggest Labor Day opening in a decade, #1 movie for the 3rd week and crossing the $100M+ mark!! https://t.co/FZnnwxFfgg

Unlike her character Francesca, a snobby socialite and one of Nick’s ex-girlfriends, Soo expressed her gratitude on Twitter and Instagram.

I’m very blessed. So thankful to be a part of this project.
The no.1 movie in the US for 3 straight weeks
We passed the 100mil mark
How amazing is this!!
Thank you guys for supporting… https://t.co/75c5t9rvyJ

While Wong’s role as Peik Lin’s brother P.T. Goh was small, he shared the cast’s sentiment.

This still doesn’t quite feel real to me tbh https://t.co/IfFuy3GLlU

Jeong is a certified scene stealer as Peik Lin’s dad Wye Mun Goh. He played on the film’s title to express his feelings.

Nick’s other aunt, Felicity Young, also seemed at a loss for words.

Tyler composed the score for “Crazy Rich Asians,” and has worked on films like “Avengers: Age of Ultron” and “Furious 7.” He also took to Twitter to send his own shoutout. 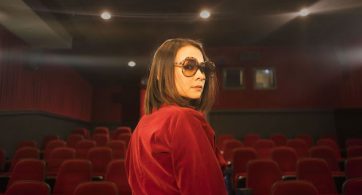 About two-thirds of the way through Mitski’s fifth album, she makes a naked confession: “My God, I’m so lonely/ So I open the window to hear sounds of people.” […]