Round two has finally arrived for AMC’s “Into the Badlands,” the critically lauded tale set in a turbulent world ruled by barons and run by slaves, and with it its two leading men, Daniel Wu (who also executive produces) and Aramis Knight.

Wu, a California native who became a martial arts movie star in China before coming back home to his first stateside project, and Knight, a young face most knew as Bean from the “Ender’s Game” film adaptation, burst onto the screen — literally, in many ways — as a deadly assassin and his young apprentice.

A dynamic cast, among them Orla Brady, Emily Beecham, Ally Ioannides and Marton Csokas, squarely ground the show in a post-apocalyptic America where guns have been opted out in favor of trained fighters, leaving room for the show’s fight choreography, directed in collaboration by Hong Kong martial arts veteran Stephen Fung and Wu, to dance like a love letter to Hong Kong cinema.

The week leading up to the season premiere, Wu was in South Africa filming “Tomb Raider,” while Knight was in Los Angeles promoting. We spoke to both about the new season and what it means to do “Badlands” in a landscape in which the idea of an Asian American action hero is something to be fought for.

It’s been more than a year since we saw you on air, and since then you’ve mentioned the significance of having Asian American male heroes on television. What has coming back for a longer second season meant to you?

Knight: When I first got onto the show, it was really apparent to me how new [this casting] is and how groundbreaking it is to cast two Asian American leads, and I’m just glad to be a part of it and to be a part of proving people wrong. [Diversity] is a huge issue — I think everybody deserves a chance.

Wu: [Season one] wasn’t a full season, so to get a full season and to be able to tell the story in a bit of a longer format is great and allows us to dig deeper into the characters. In terms of diversity, it’s not just the Asians [in the show]. Especially this season — I’m very proud of that. It’s not an agenda, but it is something AMC wanted, and I think it’s a great thing because I think that’s what we need. We need TV and media now to reflect more of what’s happening in our society. As we know, America’s not just black and white. There’s Asians, Latinos, all these others. I feel it’s our responsibility as producers to represent them.

In the context of discussion on Hollywood diversity, it’s easy to label you as ‘Asian American actor,’ instead of ‘actor’ — is that something you’re conscious of? Does it affect you?

Knight: That’s always something you’ve got to worry about, because it’s easy to get pigeonholed in this industry. You’ve got to be very selective about the things you’re involved with. This TV show is for everybody … but obviously it’s something I’m aware of. I want everyone to like the things we’re putting out and not make it just a ‘one [race]’ thing. This show really has a lot for everyone. Kickass female characters, romance, hate, violence. There’s so much more to it than it just being two Asian Americans in the lead.

How was training prep this time around?

Wu: It’s easier this time, but it’s also a lot more difficult. There’s a lot of fights. There’s 10 episodes, as opposed to last season, when there was only six, so that means there’s a lot more fights. The final episode is a really amazing fight. We build up to that over the season. We have a variety of different kinds of fights this season. This season, we’re trying to experiment and push the boundaries of what we can do. The first two fights, they’re very Jackie Chan-esque in that there’s comedy involved. Last season, we were very serious.

Knight: I found that I was already a much better martial artist coming in because I trained a lot in the off-season with the stunt guys from the show. I had already become more flexible, I had gotten stronger, and I had gotten taller, and just in general grown more into my body. For me, the second time around was way easier. When I first started, I had a hard time literally reaching past my knees. Now, I can palm the ground. I made so much improvement that it was completely night and day. It felt like I took 100 pounds off my back. That was something that was especially emphasized by Daniel. He would always text me, ‘You’d better be stretching right now. Trust me, you will get injured, you won’t be able to do these moves, you’re not going to want a stuntman to do them for you.’ He knew the rundown. I really took his advice.

Knight: He is! He would lead us in conditioning. It wasn’t just stretching and technique, but strength training and helping with boxing and footwork.

How was working with Stephen Fung again?

Knight: The first time around, he overlooked all six episodes. He was our fight director on our fight unit — there’s two units on our show. There’s a drama unit, and then there’s a fight unit. They need to be perfectly in tune with each other. Stephen, in season two, he came in and fully directed two of the episodes, the drama as well. For the last three or four episodes, he was assisting Andy Chung on fight unit. He definitely sprinkled a bit of his magic, especially in a beautiful fight with M.K. in episode two that Stephen came and did his magic on. It went from being amazing to being just incredible.

Daniel, are your goals as an actor versus executive producer different for the show?

Wu: They’re pretty much the same. It’s about storytelling and character development, and that encompasses both sides. As an actor, you’re hoping it gets better, but as a producer, you have the power to push that along and make it happen. I think it’s generally the same, because also as an actor, you want the show as a whole to be successful, not just your role as well. Smart actors realize it’s about the whole project, not just the self. In terms of what I wanted out of the show, and what I wanted to improve about the show, goes hand-in-hand from an actor’s perspective as well as from a producer’s perspective.

What are you most excited about this season?

Wu: We have a new cast member, Nick Frost, which many of you may know from “Hot Fuzz” and “Shaun of the Dead.” I was paired with him through the whole season. Because we have someone that brings comedy to the show, which we didn’t have last season, it just made it so much fun. It makes Sunny a little bit lighter, and it also makes the show loosen up a little bit. For me personally, I really like the last episode. The whole season, Sunny’s trying to get back to his family, to his woman. It culminates in the end in the final episode — everything he’s been holding back, he has to face. There’s a big fight in the end, and it’s beautiful. There’s a bittersweet ending to the whole story. It was challenging, but I think we pulled it off.

Daniel, you grew up in America. Your filmography spans 20 years, but until a couple years ago you hadn’t done many projects in the U.S. What’s the reaction been like from your friends and family to seeing you on their screens, maybe for the first time?

Wu: For the people I grew up with, it’s still very strange for them. Especially for the ones who have never been to Asia and never seen what that’s like for me and how different it is, I think it is weird for them. … I see some of my old high school friends [while in California]. But then, they’ve only seen the Badlands, they haven’t seen the Hong Kong movies. So it is a very surreal, strange experience for them, especially when I get recognized. They remember me as the kid they went to junior high school with, not this movie star. 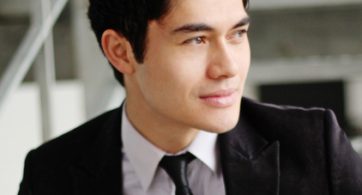 “Crazy Rich Asians” has its male lead in Henry Golding, a Southeast Asian English actor, according to the Hollywood Reporter. The project is a film adaptation taken on by […]