As someone who has spent his whole life training in martial arts — it was this hobby that landed him the leading role of Mike Fukanaga in Nickelodeon’s Supah Ninjas and jumpstarted his acting career, after all — you’d think the fight sequences featured in Disney’s newest animation action flick Big Hero 6 would seem kind of mediocre to Ryan Potter. But he’s as floored by the elaborate animations as anyone.

Potter lends his voice for the first time to the character Hiro Hamada, a 14-year-old genius living in the fictional city of San Fransokyo and the eventual leader of Big Hero 6, a team of super smart superheroes. After the sudden death of his older brother Tadashi, Hiro decides to investigate the suspicious circumstances surrounding the tragic accident with the help of Baymax, a healthcare robot designed by Tadashi. Hiro’s older friends, GoGo Tomago, Wasabi, Honey Lemon and Fred, also join the fight in a show of friendship.

The friends skate, race cars and even fly through the city of San Fransokyo, which is a clever and imaginative mash between the major cities of Tokyo, Japan and San Francisco, U.S.A. After watching the finished product, the city itself stirred up fond memories for Potter, who was raised in Tokyo until his family moved back to the United States at the age of seven.

“There are so many similarities between Tokyo and San Fransokyo that when I watched the film, there were a lot of hidden moments there for me,” said Potter. “There were memories of me taking the train with my mom … it represented a big part of my childhood.”

The presence of Tokyo wasn’t the only thing that held meaning for Potter. Many people are already pointing out the fact that not only does Disney’s newest venture feature a multiracial cast and a diverse number of characters, but the main hero himself is biracial.

“If you consider the U.S. the melting pot of the world, hopefully in the future, the media is going to show that,” said Potter, who is of Japanese and Caucasian descent. “This movie has opened doors for more mixed roles for characters and actors who are biracial.” Growing up, Potter would watch TV and notice that he never saw any heroes who looked like him. People of mixed race were not represented in the media. Big Hero 6 gave him Hiro, the hero he’d always wanted to see as a child. Though the Big Hero 6 team includes characters of various ethnicities, Disney doesn’t poke fun at the characters’ backgrounds, or even highlights them, for that matter. “These characters don’t feel like they need to identify themselves — they’re just San Fransokyans,” said Potter. “It’s just like when people ask me about my background. I don’t like to say I’m Japanese and Caucasian — I say I’m American. Because that’s all that matters.”

With his first animated feature under his belt, Potter is hooked to voice-overs and hopes he can join more animated projects in the future. His dream film? Any future Studio Ghibli movies legendary Japanese filmmaker Hayao Miyazaki decides to embark on. “It’s so freeing,” Potter said of the advantages voice-acting has over live acting. “You go into that [recording] booth and you don’t have to worry about what you or your body looks like. You can be completely yourself.” The young actor, while he has no big upcoming projects, is currently planning on applying to various film schools in Southern California and dreams of working with Jeff Bridges and Robert Downey, Jr. But Big Hero 6 is a project that will remain close to his heart. “My favorite scene of all time has to be the first flight sequence Hiro takes with Baymax,” said Potter, referring to the scene where Baymax takes Hiro on an adventure through the city and over the clouds. “I think it’s every kid’s dream to fly.” 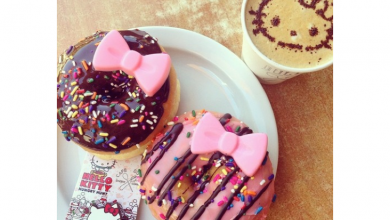 November is finally here! Aside from the countless pies you’ll consume during Thanksgiving, there’s another reason for you to be excited this month: November is Hello Kitty’s 40th […]