The video producers behind the Jubilee Project have partnered again with basketball star Jeremy Lin and his foundation this time to inspire an “acts of love” campaign, which begins today.

To launch the campaign, the Jubilee Project and the Jeremy Lin Foundation released “Lost for Words,” an eight-minute video starring Klo Lay Pla, who plays the role of Ka Nyaw, based on his own experiences of coming to America from Burma and facing cultural barriers and bullying from classmates. Lin plays the student’s tutor, whose friendship and mentorship inspire Ka to pass on the love.

The campaign is meant to encourage young people to make a difference through acts of kindness. The Jeremy Lin Foundation has even suggested a schedule of when and how to show #ActsOfLove each day from today through April 9.

The video was produced by the Jubilee Project, which has created 120 videos that have raised more than $35,000 for causes ranging from Hepatitis B to Japan tsunami relief. The project was founded by three young Asian American men who wanted to produce videos that inspire others to do good.

Lin also starred in the popular video, “The Last Pick,” (with more than 2.8 million views) produced by the Jubilee Project last year. 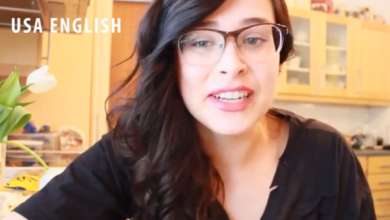 19-year-old Finnish YouTube user Sara is seen in this video spending nearly two minutes speaking absolute gibberish. She may not know many languages, but she certainly sounds like she […]