What do In-N-Out, Roscoe’s House of Chicken and Waffles and Korean barbecue all have in common? All three are at the top of Jeremy Lin’s list of foods to eat after the NBA season ends Wednesday.

Linsanity struck again as hundreds of fans of all ages lined up to get autographs from the 6’3” Lakers guard at the WSS store in Lincoln Heights, Los Angeles on Saturday. Lin quickly rose to international stardom in 2012 when he led the New York Knicks on a 7-0 game-winning spree in a seemingly overnight success story.

Addressing reporters, Lin said he was excited to “get to spend time with [fans] today” since “not everyone gets a chance to go to the games.”

As the Lakers approach their last game of the NBA season against the Sacramento Kings on Wednesday, Lin recalled his favorite moment of the season wearing the iconic purple-and-gold uniform.

“There were probably two games,” Lin said. “When we got our first win, that was pretty sweet–that came like six games into the season so [that was] a really neat one–and then recently against the Sixers at home. That was a pretty fun game.”

Lin, who recently had an MRI on his left knee, said that the soreness was improving.

“My biggest thing right now is just getting all the swelling out,” Lin said. “It is getting better everyday and [there is] less and less swelling so I’m already back out on the court. I’m already shooting and we’ll start wrapping it up in terms of just being able to run, jump and do those things starting tomorrow.”

However, the day after Lin’s in-store appearance, Lakers head coach Byron Scott stated that Lin will be out for the rest of the season.

KoreAm was able to ask the last question before the fan signing began: “Any advice for Sim Bhullar, who will be the first NBA player of Indian descent and a trailblazer similar to you?”

Lin said “there was going to be some unknowns,” referring to his own rocky start in the league, but suggested that the rookie ultimately enjoy the experience.

Following the short question-and-answer session with reporters, fans were then allowed to enter the store and get one item signed by Lin, provided that they made a minimum purchase of $30.

Seeing the overwhelming abundance of New York Knicks merchandise toted by fans, as if Lin’s time with the Houston Rockets and L.A. Lakers had never happened, one could almost forget that the Linsanity days are  long gone.

It is unclear whether Lin, as an unrestricted free agent, will be returning to the Lakers next season.

All images courtesy of Daisy Chen 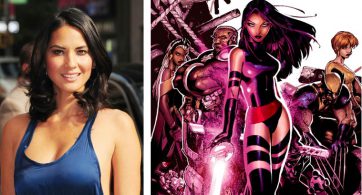 While X-Men: Apocalypse is still in its early pre-production stages, the producer Bryan Singer has been utilizing Instagram to make some major announcements about the movie’s progress. For […]