Lin, who injured his hamstring six weeks ago on Nov. 2 against the Detroit Pistons, scored 10 points (4-8 FG), corralled three rebounds, and doled out seven assists in just 20 minutes off the bench during a 122-118 loss against the Rockets, one of his former teams. He also chipped in a steal and a block.

“I think I can appreciate it a little bit more having been out for so long,” Lin told ESPN after the game. “The game, the experience. I’m just going in there and going to have a lot of fun just competing again and being with my team on the floor.”

Though the 28-year-old was on a strict minutes limitation and is being eased back into his starting role, Nets coach Kenny Atkinson kept him in the game during crunch time. However, Lin ended up missing a key 3-pointer with 18.9 seconds left that would have put his team ahead by two points.

Despite missing the clutch shot, Lin contributed heavily as he helped the Nets come back from a 15-point deficit to take a three-point lead with just under two minutes left, an advantage his team could not hold.

“I felt like I’ve got to do a better job of getting a better shot. But I think for me and our whole team, we played aggressive, we played confident, we played to win, and I’m OK with that,’’ Lin told the New York Post. “We just want to play with a lot of heart, and harder than the other team.”

According to RotoWire, Lin probably will not start and figures to come off the bench for at least a few more games before retaking his starting position. 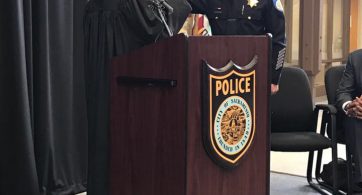 The Sacramento Police Department swore in its first ever Asian American Chief of Police Monday on an interim basis. Deputy Chief Brian Louie, 57, will take the reigns from Sam […]