The Brooklyn Nets’ Jeremy Lin thinks Asian American masculinity is an issue that should be talked about more.

In a YouTube video that was uploaded last Thursday, Lin talked about his view on how Asian Americans are perceived in America after YouTuber Kevin Kreider asked him a question regarding Asian stereotypes during a post-game Q&A.

“Did you ever come across the stereotype of Asian guys not being attractive?” Kreider asked Lin in the video. “And if you have, how do you think we can break that in the American culture especially?

Lin responded by reflecting on the 2010 NBA draft when he and basketball player John Wall scored similarly in athleticism, but that it was Wall who was taken as the No. 1 pick.

“Me and John were the fastest people in the draft, but he was athletic and I was ‘deceptively’ athletic,” Lin said. “And I think I’ve been deceptively ‘whatever’ my whole life.”

Lin then went back to Kreider’s question by discussing his views on interracial dating.

Lin concluded by saying “Asian American males are viewed differently, but I think we just need to keep being ourselves and I think the world will come around and appreciate us Asians.”

In the video, Kreider argued that Asian Americans are victims of being portrayed stereotypically by media and that people should speak up against those portrayals.

Check out the video below: 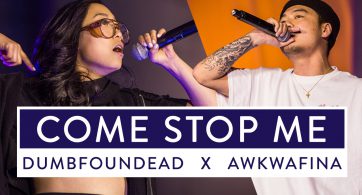