One of my platoons in Za Khel, Afghanistan, doing a dismounted patrol that was supposedly embedded with the enemy.

Through A Soldier’s Lens

A Korean American officer in the U.S. Army shares his wartime experiences, in words and images, from his deployments in Afghanistan and Iraq.

I first came across Army Capt. John Principe’s Afghanistan and Iraq photographs on—where else? — Facebook. His photos and commentary on the pictures struck me as different from what I usually see depicted of the war in the media. His pictures were more raw, mundane and quietly poetic than the typical perfectly composed and lit images of war. Though Principe would face bullets, suicide bombers and the tragic loss of fellow soldiers during his deployments, he somehow managed to find other moments of humanity and even humor, and captured them with his shockproof and waterproof point-and-shoot, which he carried in his upper left shoulder pocket.

With the official end of the Iraq War and the supposedly imminent conclusion of the war in Afghanistan, it seemed apropos to share a Korean American soldier’s experience in war zones, as seen through his lens.

Born in Korea, Principe was adopted as a baby by an Italian father and German/Swedish mother. He arrived in America when he was 5 months old and grew up in Cupertino, Calif., the home of Apple Computer. Not unlike many young men, Principe decided to join the military when he was 20 to straighten out his life. “I was getting into some trouble, doing things that I shouldn’t have been doing, and did not have the discipline to go to college” he says. “I just needed to get away from everything, to start new.”

He arrived at Fort Benning, Ga., for basic training on his 21st birthday. After his active duty enlistment as an infantryman, he decided to “get out and give college a shot,” and ended up a political science major at the University of California, Berkeley. In 2003, the United States had just invaded Iraq, and the Army needed people urgently, so he was allowed to commission in two semesters instead of four years as would be the case for an ROTC cadet. He graduated from Berkeley the summer of 2003, and spent a year doing infantry platoon tactics and leadership training, as well as attending and graduating from the elite U.S. Airborne Ranger School. The adoptee would return to Korea for his first duty assignment as an officer on Christmas Eve 2004 for a yearlong tour.

Capt. John Principe, in Kunduz, Afghanistan, in 2010, in a photo taken by one of his soldiers.

“As soon as I got there, it felt really good, like I was at home,” he remembers. “It was snowing, extremely cold. [I was] away from my family and friends. And even though I didn’t speak the language, it [was] a lot easier being a Korean in Korea than being a Korean in America because everyone looks like you in Korea. You’re with your people, and I just felt at ease.”

When I asked Principe about the recent hazing-related suicides of Pvt. Danny Chen and Lance Cpl. Harry Lew, both Asian American, he said that hazing was common among younger and lower-ranking soldiers 16 years ago when he started his military career. “I saw a lot of in-your-face stuff—let’s just say, senior guys making junior guys do things that were not comfortable or fun,” he says. This type of behavior was often overlooked, says Principe. “But today there is zero tolerance,” adds the Army captain, “and [hazing] is punishable under the uniform code of military justice.” He also said that he never personally faced mistreatment on the basis of his race.

It was raining, and we were at a checkpoint in Kunduz that didn’t have a lot of shelter, so I slept under this piece of cardboard.

Principe deployed to Iraq during the surge in 2007. “I thought when I went over there that I was going to die for sure because, at that time, American soldiers were dying over 100 a month. And it was tough,” he says. Serving as an infantry platoon leader, Principe recalled 24-hour long patrols, rampant sectarian violence and the common sightings of mass graves. “Life was hard, but that was my life, and I adjusted. There were times we went a month without taking a shower and days I just did not have time to brushmy teeth. It was nasty, and everyone had heat rash, and everyone was eating MREs (Meals Ready to Eat).

“People shot at us,” he describes. “There were suicide bombers out there that would just blow themselves up and kill innocent civilians and soldiers. And there were a lot of people out there that just wanted to kill Americans.”

One day, while his platoon was crossing through an open area in Diyala province just north of Baghdad, he noticed automatic machine gun and precision small arms fire rounds coming their way and tried to run as fast as he could to take cover. Before he could round a corner into a courtyard, a bullet hit him in the right shoulder and knocked him off his feet. “A sergeant just grabbed me and pulled me in,” he recalls. “The medics started to treat me, and at that point, it got crazy. Everyone was shooting.”

Machine gun position from a checkpoint. This is what the gunner looks at 24 hours a day.

Principe completely recovered physically from that wound, and in 2010, would go from one war zone to another, sent to Afghanistan to serve as a company commander. “At least Iraq was a country that had infrastructure,” he says. “Afghanistan was tribal. Most people I encountered couldn’t read or write. There were a lot of people living in huts, … mostly extremely poor. Drug use in Afghanistan is common. In Afghanistan the enemy seemed more experienced and aggressive in fighting. I encountered more IEDs (improvised explosive devices) in Afghanistan than I did in Iraq.”

He returned to the U.S. a year ago, and now trains soldiers for combat at Fort Irwin, National Training Center (NTC), in the deserts of California, in live-fire and situation training exercises that simulate counter insurgency operations and force-on-force combat.

The veteran of two wars says that most men in the Army don’t want to admit they’re “messed up in the head, at least to doctors, but they probably will to their buddies.

“Everyone that I’ve met that’s been in combat is definitely different from what they were like before that, at least what they started off as. I think anyone who has been under fierce direct fire contact or lost or witnessed a buddy killed in action suffers from some level of PTSD,” he says.

Coming out of an all-night patrol out of Baghdad. No casualties.

Principe admits that the Army has been full of some disappointments and that it hasn’t been an easy life. “It makes you do a lot of things that you don’t want to do—it’s uncomfortable, just a lot of things that normal people don’t want to do,” he says. “But I don’t ever regret joining the Army. It’s helped me out in so many ways—just get my act together, becoming a man and having a career. And showing me that I can accomplish pretty much anything I put my mind to. It gave me discipline, paid for my college. I met a lot of great people, made some great friends, traveled a lot of the United States and the world, which I never thought I would ever see.”

This article was published in the June 2012 issue of KoreAm. Subscribe today! 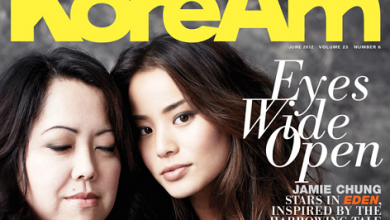 Out of the Shadows story by OLIVER SARIA photographs by DIANA KING Eden, a new film that garnered a heap of awards at this past spring’s South by Southwest film festival in […]