Sonny looked around the poolroom at the Green Dragons and sized them up: they had fancy clothes, and money, and beepers, and did not go to school. They had cars. On the spot, he decided to become a member.

It was an easy choice for a teenager who grew up in the underworld of New York City’s Chinatown in the late 1980s. Fredric Dannen extensively chronicled the short-lived and chaotic rise and fall of the Green Dragons in a 1992 New Yorker piece, “Revenge of the Green Dragons,” where the excerpt above comes from.

This week, Revenge of the Green Dragons, a new film based on the article, premiered at the Toronto Film Festival. It looks to add another chapter to gang and mafia lore, and the names attached give it unique credence: Andrew Lau (Infernal Affairs) directed the film, with Martin Scorsese (The Departed) as executive producer.

Korean American actor Justin Chon plays Sonny, inspired by the “Sonny” from the New Yorker piece. After joining the Green Dragons, he quickly rises to prominence within the gang alongside his close friend and brother Steven Ng (Kevin Wu). In the midst of violence and ill-fated love, however, their relationship begins to fray, until Sonny is forced to seek revenge on the very gang that made him.

Chon spoke to KoreAm earlier this month about the new role.

What was it like to play your first character in an action crime drama?

Chon: The thing about Sonny, my character, [is] I don’t have big monologues or speeches—a lot of it is told through my presence, or my looks. That was really challenging, because the audience needs to understand how I feel without me saying anything. It’s hard to predict and act accordingly.

Getting to an emotional place without having dialogue to ramp me up, or prep me into getting a certain stage, is very hard. It’s like asking someone to go from zero to 100 in a split second. That required a lot of emotional preparation. I think that was the hardest for me.

What is the relationship like between Sonny and Steven?

They’re pretty much like brothers. They’re not brothers by blood, but when they come to the U.S., Sonny loses his mom, and Steven’s family takes him in, not willingly, but it was kind of put upon them. They’re the same age, and they end up becoming like brothers. Their dynamic is different, though, because Steven is more hotheaded than Sonny, who’s more street-smart and has a lot of heart.

Did you read up on the history behind Revenge of the Green Dragons before taking on the role?

I read the New Yorker article, but you have to be careful with these things because it’s based on true events, true people, and a lot of them are alive still.

There’s a lot of research that I did do, but to a certain extent there’s some fictionalized stuff. I [took] my own liberty to make my own interpretations, and I think most of my research just came from what gangs there were at the time, what areas they hung out at, how did they dress, what was their hair like. After I did my research, I took my own interpretation and made my own choices.

How challenging was it to take on a character who is Chinese?

[At first], the directors were scared there would be backlash from the Chinese community casting a Korean kid as the main lead. There was a lot of debate about that. I acted, I did my audition, and I thought I did a great job, and they [agreed]. I met with them again, and they said, “Hey, we’ll be honest with you. If you were Chinese, this would be easy, an easy choice, but the fact is, you’re not.”

But I always believed that true talent—if you work hard at your craft—shines. So in this case, it worked in my favor. They believed in me, they really thought I could pull it off. … I literally got cast and I flew out the same day, with the clothes on my back.

The hardest thing was, there’s some stuff I say in Cantonese, and Cantonese is hard. There’s like, [nine] different tones. Mandarin, there’s four. You say a little bit wrong, and it sounds funny.

Sonny tries to get through to a stern Paul Wong (Harry Shum Jr.), the founder of the Green Dragons.

This was your first time shooting with Hong Kong directors. What was the experience like?

The style of shooting was new to me. The way they shoot is really fast. I’m used to doing a rehearsal first, and then blocking it out, and setting up for lights and whatever, but a lot of [Director Loo’s] sets have practical lighting, and you just shoot really fast. A lot of days, you finish after eight or nine hours, but you only get, like, one or two takes [per scene] … because [the director] feels, if you didn’t get it on the first take, it’s not going to get any better than that.

I learned a lot from both directors, I learned about how they shoot in Hong Kong, a lot about filmmaking. It was just different. I’m an American actor who’s worked with mostly American productions, so it opened my eyes to how other people do it around the world.

It was a great experience; I made some really good friends. It was dark—the movie’s dark, but it pushed me as an actor, too.

You can now watch Revenge of the Green Dragons via stream on DirecTV, or wait until Oct. 24 for the theatrical release from A24 Films.

Images courtesy of A24 Films 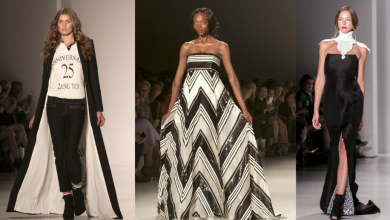 New York Fashion Week is well underway and contributor Mariana Leung’s got the inside scoop on the shows. Here, her recap of Zang Toi’s Spring 2015. Fashion Week […]