Resident funnyman Ken Jeong is heading back to the big screen.

The actor is confirmed to star in the action-comedy “My Spy” alongside “Guardians of the Galaxy” star Dave Bautista, Parisa Fitz-Henley and Chloe Coleman.

According to The Hollywood Reporter, “My Spy” follows “a hardened CIA operative (Bautista) who finds himself at the mercy of a precocious 9-year-old girl, having been sent undercover to surveil her family.”

It will be released by STXfilms, home of “The Edge of Seventeen” and “Mile 22.” Peter Segal, best known for “50 First Dates” and “Get Smart,” is on board to direct, and “The Meg” writers Jon and Erich Hoeber are contributing their talents as well. The cast is currently filming in Toronto, according to Deadline.

“[Bautista’s] father/daughter-like chemistry with Chloe Coleman is a true pleasure to watch, and we could not have asked for a stronger roster of funny and talented co-stars to round out the cast of this wildly entertaining film,” Adam Fogelson, STXfilms chairman, told Variety.

The “Crazy Rich Asians” star has had a whirlwind year, with roles in “Goosebumps 2: Haunted Halloween” and “Then Came You.” He’s also lent his voice to TV cartoons “BoJack Horseman” and “Bob’s Burgers.” 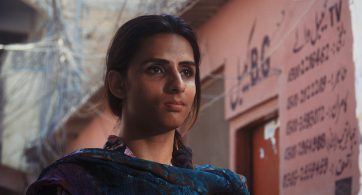 In Hammad Rizvi’s short film “Rani,” we meet a soft-spoken transgender woman (Kami Sid) in Pakistan who works hard to make a living selling children’s toys on the streets. […]