In Hammad Rizvi’s short film “Rani,” we meet a soft-spoken transgender woman (Kami Sid) in Pakistan who works hard to make a living selling children’s toys on the streets. When she happens upon an abandoned baby, she brings it home with the intention of becoming its surrogate mother — but all too quickly learns just how unrealistic that can be within a cruel society that refuses to face her past its labels.

The film, shot in Karachi, Pakistan, has shown at film festivals around the world, including OutFest, CAAMFest and the International Queer Film Festival in Germany, and is a finalist for NBCUniversal’s Short Film Festival.

Director Rizvi, whose parents are Pakistani immigrants, is an Oklahoma-born filmmaker behind short films like “Road to Peshawar” and “Haze.”

What inspired you to make a film specifically about a transgender Pakistani woman?

One reason was personal experience. I’ve always wanted to make a film in Pakistan. The transgender community stood out to me because when we were growing up as kids, we were taught that if we saw a trans woman on the street begging or just going about their business, we were to avoid them, and kind of look at them as the “other.” As children, we were just like, “OK,” but didn’t know why. Now that we’re older, of course we say, why are we taught to do that? It’s f-ed up. Factors from culture to religion to just understanding come into play — people don’t understand what transgender really is, and it just gets passed on. So I wanted to do something about that. It feels like in 2018 whether it’s Pakistan or the U.S., we still haven’t gotten to a point where we have equal rights for everyone. The LGBTQ community in general has been making great strides in Pakistan and in India, so I felt this was a great way to give that movement added boost.

While working on the film, how much interaction did you have with the local transgender and LGBTQ community, in Pakistan?

I was adamant we cast trans actors. Luckily Kami Sid, who is the star of the film, came for an audition and she and I struck not just a work relationship, but a friendship. I said, “I don’t want to do anything that is out of the realm of understanding — whatever is inappropriate or right, just let me know.” And she was super happy to do that. She also introduced me to a good friend who is also active in the local trans community, and she would be like, “Let’s talk about the character of Rani.”

Your depiction of motherhood in the film is striking. Where did you draw from for that aspect?

Motherhood is such a powerful thing, and it’s one of those universal themes that no matter if the film is in Urdu or in Chinese or whatever, I feel those themes cross all barriers. I’d be lying if I said I didn’t consult with my mom a lot. I’d ask, “Does this resonate with you?” She was kind of like my script advisor, in a way.

This might be a sensitive question, but did your mom ever, like those we see in the film, tell you to stay away from the transgender women on the street?

No, that’s a totally valid question. She was never that extreme, but she would say, “Oh, that’s how they are,” you know? It was a blanket statement for “other.” So she’d say, “That’s how they are. They should be treated right, but just don’t get too close because who knows?” But to my mom’s credit, she felt “Rani,” and what the film was trying to do, she was super supportive. And she’s the first to admit that growing up, she didn’t know what the trans community was. Through the film, she’s also learned more that she didn’t know.

What was Kami Sid’s reaction when she saw the final cut?

For me personally, the biggest satisfaction I had was Kami’s first reaction when she saw it. She felt the film portrayed the trans community in a human and honest depiction. That meant so much to me, especially because in the media in that region, there are stereotypes left and right. There’s a caricature associated with the LGBTQ community, period. I wanted to stay away from that, and she validated that for me. We were trying to have everyone relate and and feel like they could take away something from the story, whether they’re supporters or against the trans community.

Have any of the locals seen the film? Have you had a chance to screen it in Pakistan?

We haven’t yet, but we’re planning on doing a tour of sorts this coming spring. Even though I would argue that the majority of Pakistanis want more rights for the LGBTQ community, and they want to see the trans community treated with respect, the issue is, you still have those who don’t see it that way. And those people are usually the most vocal and the most violent. We were filming on location, and one of the far-right religious groups had a billboard up that said, “A good transgender is a dead one.” The more you start seeing progress — the trans community got their identity cards last year, they’re included in the census, great things are happening — that just makes the fringe groups more violent. So we have to keep in mind that that is still a reality.

As the filmmaker, when you see a billboard like that, what’s going through your head?

The first thing was, “Oh shit. This is real.” Two, it was actually more of a motivational factor for me, like, “OK, this is something that we need to do.” All I know is that we need to make this film and it’s important than ever before. No matter how hard the shoot was, for the entire team, I think we were all able to power through because we believed in what we were doing.

What other projects are you working on?

The door is open right now. I’m currently writing a TV pilot and a feature film, and I’m hoping to get traction on the feature within the year. It’s basically about the current immigration situation in America, about families that are separated. Ideally, I would love to do more stories about the South Asian American community here, which I feel is vastly underrepresented, as is the Asian community in general. Like you ask anyone, and it’s like, “Oh yeah, Harold and Kumar!” That’s the only thing they can think of. So that’s definitely something I’m working on. 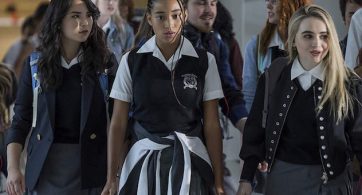 Megan Lawless has a clear vision for her future: “I desperately want to work with Jon Chu. Yeah, desperately.” An outspoken “Crazy Rich Asians” fan, the actress admired the […]