Temperatures may have been chilly in early January of this year, but the 2014 lineup for the Coachella Valley Music and Arts Festival had just been announced, and all anyone could talk about was springtime and the shorts and tanks they’d get to wear in April under the hot Indio sun.

Coachella has consistently set the bar higher and higher in terms of surprises each year, the most recent example being Snoop Dogg and Dr. Dre’s performance with a hologrammed Tupac in 2012. What could Coachella have in store for us this year? Judging from the lineup, more kickass Asian artists.

Take one of the Dum Dum Girls. The all-female rock band was started back in 2008 by singer-songwriter Dee Dee Penny, and their current drummer is Sandra “Sandy” Vu, who is of Vietnamese descent. When she’s not drumming for the girl group, Vu fronts her own music project, SISU. The drummer can also play guitar, piano and flute.

Then there’s Edward Ma, also known as edIT, one of the three members of The Glitch Mob, the L.A.-based electronic music group. Ma began deejaying during his college years at USC and then began producing music professionally as the Con Artist.

Alisa Xayalith is the frontwoman of the New Zealand electro rock ensemble The Naked and Famous, known for their hit song “Young Blood,” and is of Laotian descent. The vocalist manages fine in a band of all men — she grew up in New Zealand with three brothers.

Bo Ningen is a four-piece punk band that hails from Tokyo. The members – Taigen, Kohhei, Yuki and Mon-chan – refer to themselves as “enlightenment activists from far east psychedelic underground.”

Representing the R&B genre is solo artist JheneÌ Aiko, who, among other ethnicities, is Japanese. Known for her soft, relaxed vocals on tracks by Drake and Childish Gambino, Aiko is easing into her own. The singer released her EP Sail Out last year and plans to drop her debut album in May.

Coachella runs on two weekends from April 11 to 20 and is already sold out. With the popularity of Coachella increasing each year, it’s cool to see a parallel growth in the diversity of its performing artists.

This story was originally published in our Spring 2014 issue. Get yours here. 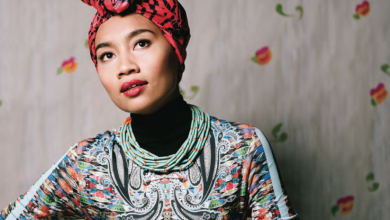 Story by Ada Tseng.  Singer-songwriter Yuna Zarai (known as Yuna) has a quick and easy remedy for writer’s block: “I just call up my best friends and ask, ‘Hey, […]