Paul “PK” Kim, 33, the comedian and founder of Kollaboration, a multi-city Asian American talent showcase, is finally calling it quits after almost a decade of producing the annual show.

“It’s finally time to move on and hand it to the next generation,” he said last month at Kollaboration New York held at the Highline Theater. “You know, this is the thirty sixth show that I hosted so it’s time. As much as I want to hold on it’s hard. Like every year I keep feeling like ‘man, these kids are getting younger’ but I’m getting old that’s what it is.”

But will the show live on? In Los Angeles—where the showcase was incepted and where it held its biggest show at the Shrine Theatre last year—absolutely. But New York, where Asian American attendees seemed all but interested in their own community? On shaky ground—at best.

“”I felt like the show was a good attempt but still didn’t have the hype and pizazz that L.A.’s show brought to the table,” said Joyce Chen, 22, an onlooker. “I think it just really lacked the audience enthusiasm it needed and came off as a draft instead of a final product.”

The entire night was light years away from stellar and played much like a high school talent show but mostly bereft of any actual talent. From the gag-worthy antics of the opening act, the teenage self-proclaimed “bubblegum indie” group SuperCute who hula-hooped while singing their ways into the hearts of no one—albeit on key—about a boy they all had a crush on, to two dancing groups who haplessly attempted to dance (out of sync and with two left feet), the night was, to put it kindly, an utter bust (though an endearing, “A for effort” kind of bust.)

This, a complete change from the nearly perfect Los Angeles show in 2009, where each act shined in their own right, future big names in-the-making like David Choi, Kina Grannis, and Jane Lui, who were polished, perfected, practiced, not to mention the show having actual stars like Jo Koy and Asian pop princess BoA lending their talents to the show.

But that’s not to say that there weren’t a few gems hidden behind the heavy debris.

Cat Song crooned on the piano soulfully with a pinch of angst while adding a couple of Alicia Keys reminiscent runs. And then there was Sheng Wang, the Texan comedian who got a few chuckles from the crowd. Finally, there was PaperDoll—an alt-indie band headed by Teresa Lee, who was both flirty, energetic, with an added Karen O appeal in her stage presence that eventually led her and her band to receive the first place grand prize of $1000.

The night concluded with an ill-advised group performance of “Empire State of Mind” where each of the contestants screeched into the mics, had their hands up awkwardly repping their city all the while taking themselves way too seriously.

Overall, the night was unimpressive, but still a stepping stone in the right direction and telling on how far the Asian American community has come along in New York City.

But in the same respect, it proved that indeed, the most talented coast is the West (and best) coast.

Echoed Kim: “Hell yeah! As for as the Asian American movement, you can’t even compare. But in terms of academics, yeah, East coast they’re must smarter.”

Some photos from the event: 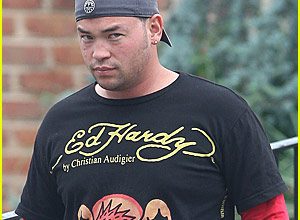 A book by celebrity octodad Jon Gosselin is in the works. Yeah, we can’t believe it either. The project appears to be in the very early stages, but will […]