Q and Nam found common ground in their immigrant mothers, hers in Hawaii and his in Sydney, to whom acting did not seem like a viable profession. To our parents, Q said, “Art is not a living.”

“It’s not that they don’t want you to be who you are, it’s that they don’t know that what you are is something that can sustain you,” Q, whose mother is from Vietnam, said.

Parents weren’t the only people who needed convincing. Inside the rooms of Hollywood casting directors and studios, Q faced pre-labeled boxes in which she was expected to play. “I had been asked many times why my English was so good, when I got my passport,” she recalled. “All these things that people would never think they would f-cking say. You just can’t believe it’s happening in front of you, but it is. … They’ve offered me every ’Street Fighter,’ ‘Dragon Ball’ this, that. I’m like, ‘Thank you, but I don’t want to perpetuate that all Asian actresses do is act and fight, fight and act.’ There’s so much more to it.”

A key consideration for projects now, she said, is to reject those boxes and ethnic-specific roles. “Not because I don’t want to play an Asian person in an Asian role,” Q said. “It’s because I need to first go far beyond that, and then be able to make decisions and come back to do what I want.”

In 2010, Q was cast in the titular role of the CW’s “Nikita,” making her the only Asian American lead on television at the time. Since then, TV screens have seen a slow but steady increase in Asian American protagonists, from “The Mindy Project” and “Sullivan & Son” to “Fresh Off the Boat,” “Quantico,” “Dr. Ken,” “Master of None” and “Into the Badlands.”

“I have a fire in me, and it burns all the time,” Q said. “I feel that fire for this community. I feel that because of what we’re building, what we’re growing on, we’re going to be seen not only differently but taken seriously as actors not because there’s an Asian role available, but because we’re going in the rooms and challenging people’s minds and hearts and saying, ‘I don’t care what you thought you saw for this. I’m going to come into the room, I’m going to be a certain level of talent for this that you can’t deny, and in that ability to not deny what it is I’m bringing, you can’t count me out.’”

Nam, whose career began with roles in films like “The Perfect Score” and “The Sisterhood of the Traveling Pants,” joined the cast of “Westworld” in 2016.

“The white beefy guy that plays studio roles, tentpole films, right now, yeah, that’s fine and great that that’s out there,” he said. “But there also does seem to be a cry for some other kind of flavor in there.”

“Literally they are proving that big studio films that are exclusively white don’t make as much money as the diverse ones,” Q agreed. “We know this now, in numbers.”

In June last year, a study by Creative Artists Agency showed that films with diverse casts perform better in the box office across all budget levels. In addition, according to the Motion Picture Association of America, nearly half — 49 percent — of filmgoers in 2016 were non-white.

Q said she feels a need to foster and find more Asian talent behind the camera, while Nam said he sees a need to tell personal stories of his family, and of modern struggles.

“[Asians] struggle with autism, they struggle with mental illness. I need those stories to be told when we’re at the dinner table … we can talk about this stuff, and no longer are we burying this up in the attic,” he said.

“This is the generation that has to do it,” Q said. “Because our parents’ generation is not.” 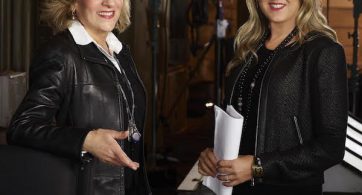 The newest diversity program at NBC is Female Forward, which will push toward behind-the-camera gender parity by providing fresh female directing talent an opportunity to direct one of the network’s […]