A Southern California woman was killed last week when a 10-ton eucalyptus tree fell on her Hyundai Accent which had been idling at an intersection in Costa Mesa.

Authorities are still investigating the cause of the tree’s fall but were looking into whether a 3.5 earthquake in nearby Newport Beach contributed to the incident, according to the Los Angeles Times.

UC Irvine seismologist Lisa Grant Ludwig said the quake, which hit about 2:56 a.m. Thursday and was centered near Newport Beach, may have played a role, though there could have been other contributing factors.

Haeyoon Miller, 29, had been on her lunch break from her job as an executive assistant at a mortgage firm in Newport Beach.

She immigrated to the United States from South Korea as a 10-year-old violin prodigy. She attended the Juilliard School in New York and went on to perform at Carnegie Hall, according to George Osorio, 58, her boyfriend of five years.

The Newport Beach Independent said Miller attended the University of Southern California to study music but dropped out before graduating to get married and start a family.

She divorced in 2004 and started taking photography classes and enrolled in the U.S. Gymnastics Center in Aliso Viejo. She and her gymnastics coach, Osorio, became very close and opened [children’s gym] Pix and Flips together in 2010.

Travel was also a passion of Miller’s, Osorio wrote, she loved outdoor parks and wilderness areas. She beautifully photographed all of her trips to Utah, Vermont, Minnesota, New York, Oregon and around California, he said. 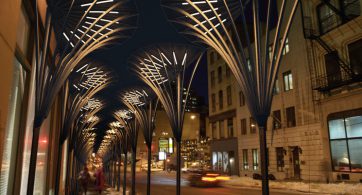 Designin’ in the Rain An innovative idea by a young architect could transform the streets of New York City. by Christine Kim Like a scene from a movie, it […]