A legendary Chinese American artist who worked for Disney and Warner Brothers died Friday at the age of 106.

Tyrus Wong — a painter, muralist, designer and film production illustrator best known for being the lead artist on Disney’s beloved 1942 film “Bambi” — was born in 1910 in Taishan, Guangdong, and moved to the United States when he was just nine years old with his father, eventually settling in Los Angeles.

Wong went on to attend the Otis Art Institute, before he started working for Disney in 1938 as an “inbetweener,” drawing hundreds of sketches of Mickey Mouse. His work eventually captured the eye of Walt Disney himself, according to the Walt Disney Family Museum, which said that although Wong worked at Walt Disney Studios for only three years, his artistic contributions to “Bambi” cannot be overstated.

“When [Wong] heard that the studio was in pre-production on the feature film ‘Bambi,’ he went home and painted several pictures of a deer in a forest,” the museum wrote in its obituary for Wong. “The small, but evocative sketches [he drew] became the basis for the film’s visual style. Walt Disney saw that Tyrus was able to produce exquisite artwork that did not necessarily look like the forest — but rather — felt like the forest. Walt’s vision for [the film] and Tyrus’ work still influences films today.”

After Disney, Wong worked for Warner Brothers for over two decades as a film production illustrator.

According to the New York Times, Wong endured years of chronic lack of recognition for his work because he was discriminated against due to his ethnicity and wasn’t initially credited for his contributions to “Bambi.”

The museum took to social media to break the news and remember Wong’s legacy.

“We are deeply saddened to hear the passing of Disney Legend, Tyrus Wong,” the museum tweeted. “He was 106. Our thoughts are with the Wong family.” 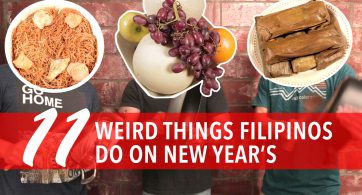 Ever wonder why your Filipino neighbors open their windows and make loud noises once the new year rolls in? Find out from our own Wesley Samilin as he counts […]