In a time of polarized politics and pointing fingers, journalist Lisa Ling is examining the moments that we share.

Ling, the former “View” co-host who currently anchors CNN’s “This is Life,” has signed a major overall deal with the forthcoming streaming platform HBO Max. The platform has greenlit her travel docu-series titled “Birth, Wedding, Funeral,” which Ling will executive produce with journalist Dan Rather, whose concept inspired the show. The show will explore a different country and culture in each episode through three universal moments of life—birth, marriage and death.

“We are living in a deeply polarized world and I am elated for the opportunity to bring us closer to one another through stories about the most defining moments in people’s lives: their births, weddings and funerals,” Ling said in a press release.

The deal with HBO Max marks an expansion of Ling’s relationship with WarnerMedia, HBO and CNN’s parent company. “Birth, Wedding, Funeral” will be one of a number of nonfiction originals from HBO Max, including Greg Berlanti and Jim Parsons’ series “Equal,” and voguing competition “Legendary” from the producers of “Queer Eye.” 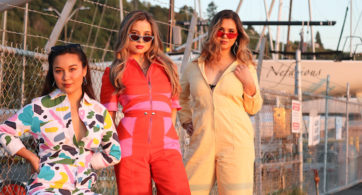 In the photos promoting their newest EP, the three members of Bleachbear exude the regal, cool-girl confidence you wish you had in your high school days, as they lounge […]