Charice Pempengco, the Filipina with the crazy vocals who became an overnight sensation through YouTube, Ellen DeGeneres, and Oprah Winfrey when she was only fifteen, got Botox and an anti-aging treatment to prepare for her debut on Glee. She’s only eighteen years old.

According to the Associated Press, Charice wants to “look fresh on camera” for her upcoming role as Rachel Berry’s (Lea Michele) foreign exchange rival. The skin-tightening procedure and Botox are supposed to make Charice’s “naturally round face” more narrow.

Charice said, “All people will be anticipating how will Charice look? Is she good enough to pit against Rachel Berry? So of course there is tremendous pressure.”

Is anti-aging at 18 normal in any part of the world? 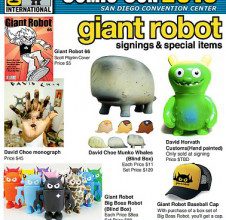 Giant Robot is coming to the San Diego Convention Center!  We all know how much of an impact Giant Robot has made in the Asian American community.  Now they’re […]