If you’ve been waiting for Madame Gandhi (to drop a new hit), you’re not the only one.

The self-described gender liberation activist and musician just premiered the music video for her 2019 track, “Waiting for Me.” Created and produced by an all-female team led by Misha Ghose, the visualizer was filmed in India, marking a first for Gandhi. The video features a diverse cast of queer, trans and gender-nonconforming individuals, dancing around contrasting industrial and outdoor landscapes. Gandhi croons over an understated beat and South Asian chants, “I’ve been living in the wild now/ When you taste freedom you’re not trying to get tied down.”

“We as artists have the power to use our art to vividly reimagine the world we wished we lived in. ‘Waiting For Me’ is a song about questioning societal norms as they exist,” Gandhi said in a recent press statement. “With the interconnected social justice movements happening around the world, we are seeing a larger belief in the power of the collective for change. This music video is a call to action for each of us to examine how hierarchy, capitalism and systemic oppression serve to keep us obedient, with little space for dialogue or critical thinking.”

“Waiting for Me” kicks off a fresh era for Gandhi, as she also announces her signing with Sony Music Masterworks. She’s also been selected as a 2020 TED Fellow, and will be participating in this summer’s TED2020 virtual conference.

Check out the video for “Waiting for Me” here. 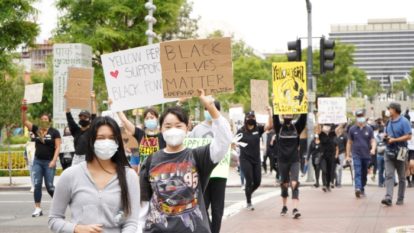 During the week leading up to June 5, a flyer was passed around on Instagram with the heading, “Asian Americans & Pacific Islanders (AAPI) for Black Lives Matter.” Simple […]