As the clock strikes 3 a.m., a four-eyed woman with a spliced face, flawless brows and faux lashes is painting away in the mirror while the city sleeps. Mimi Choi is a makeup artist, who uses her own face as a canvas for her mind-boggling illusion looks. With painstaking precision, her skin can take on the qualities of shattered glass, sunken holes and dripping paint, or even disappear behind an unraveling ribbon.

There’s no team, fancy equipment or Photoshop involved in Choi’s art. She prefers to work from home and captures her process with an iPhone X. Based in Vancouver, Canada, she’s the pioneering makeup artist behind the optical-illusion trend, a style characterized by manipulating light and shadow to bring everything from multiple facial features and grotesque attributes to fantasy themes, macabre elements and inanimate objects to life on the human face. For this year’s Met Gala, Choi lent her talents to Ezra Miller’s show-stopping seven-eyed look. But you’ve probably seen her work on Instagram before she made her debut on the world stage. She’s garnered the attention of over one million IG followers and has even collaborated with brands such as MAC, Mehron Makeup, UNICEF and Make Up For Ever.

Though Choi has been drawing and doodling since she was a child, she never thought she would get into makeup. She grew up in Macau in a competitive school environment before her parents immigrated to Canada. “I think a lot of Asian kids might feel the same way,” she says. “I focused mainly on science and math. My parents knew that I was interested in art, but it was not something that I took seriously.”

Five years ago, Choi worked as a preschool teacher and occasionally did her friends’ bridal and graduation makeup. Feeling directionless and depressed in her 20s, she decided to attend makeup school, where she experimented beyond traditional beauty looks. Her first big break was with NYX Professional Makeup, which featured her on its platforms during her second year of doing illusion makeup. “I remember I was in the kitchen, scrubbing the sink, and I saw my phone flashing. I was like, ‘What’s going on?’” Choi says. “I turn on my phone, and I went from 5,000 followers to 15,000 in one night.”

Choi cites painters Salvador Dalí and M.C. Escher as sources of inspiration, but also draws from another unexpected source: sleep paralysis. It’s a condition that she describes as “when my awakened self is trapped inside of my sleeping body.” “I hallucinate and sometimes see a lot of very frightening visions,” Choi says. “I realized that, when I draw them out [through my makeup], I don’t think about them anymore. Makeup heals me and helps release my fears.”

She often takes her paralyzing visions and paints them directly on her face. Her creative process is simple: she never plans anything out (with the exception of Miller’s Met Gala look, which she planned at 4 a.m. the day of). Though the opportunity to showcase her work on the international stage could be considered a major feather in any makeup artist’s cap, Choi never wants to feel complacent in her journey. “I want to create new art all the time, and I don’t ever want to stop,” Choi says. “I don’t want to ever feel like, ‘Oh, I’m done now.’ It’s never enough. Every day I feel like I’m happier than yesterday just because I get to do something that I’m passionate about. Everyone is capable of that. It’s just we’re sometimes scared.” 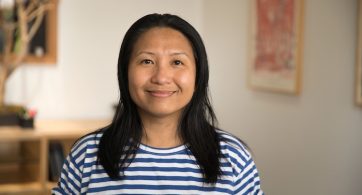 NBC Entertainment just announced the 2019-2020 classes of its Female Forward and Emerging Director Program, and three of the visionaries are repping Asian America in the director’s chair. Kim […]