In the FXX comedy Man Seeking Woman, which premiered in January and airs Wednesdays through March, Jay Baruchel (This is the End) plays Josh, an average guy looking for love. Though his plight might seem clicheÌ, the series takes place in a fantastical alternate reality, where the troll his sister tries to set him up on a blind date with is a short, green, slimy creature living under a bridge; sending the appropriate text message to a girl you like becomes a covert CIA operation; and the new guy your ex-girlfriend Maggie (played by Japanese hapa actress Maya Erskine) is dating is the worst person in the entire world. Literally. It’s Hitler. He’s still alive.

The unfortunate wrinkle in Josh’s desire to seek a woman is that he’s not yet over his first love. Erskine, who acted previously in the Amazon TV show Betas, is excellent as the girl you can imagine ripped his heart out and also as the girl he can’t get over because she seems so great. You even like her when she says crazy lines like, “My relationship with Dolphy has nothing to do with you.” (That’s Adolph, to the rest of us.)

Audrey Magazine: How’d you get involved with Man Seeking Woman?
Maya Erskine: I was pretty lucky. I just found out that the casting director from Betas, Alyssa Weisberg, put in a good word for me, and then I got to send in a tape really last minute. This is not a typical audition process. Normally, you have to go in several times to test. But because they were casting out of New York, and I was in Los Angeles, I just sent in one tape, and for some crazy reason got the job!

AM: It’s such a unique show. What did you think when you read that your character would be dating a 126-year-old Hitler – which I’m guessing is strange enough – before you even knew it’d be an unrecognizable Bill Hader (Saturday Night Live) playing him?
ME: I fell in love with the script immediately, and I was so excited by the idea of playing someone who is sincerely and truly in love with Hitler at 126. And then on top of that, you get Bill Hader to play him? I was initially terrified to be in the same room as him, because I turn into a mute jelloid creature when I’m around people I respect. I didn’t become best friends with him like I imagined we would, but I did get to play with him when the cameras were rolling. And that was heaven. I didn’t have to do anything but play the scene exactly as it was written, totally straight, and just respond to whatever Bill was doing. And every choice he made was brilliant. It was also my first sex scene ever. With Bill Hader. As Hitler. In a wheelchair.

AM: Can you give us a taste of what’s coming up for your character? Even though Josh is trying to move on, how much is Maggie rooted in his psyche?
ME: The show follows Josh’s attempt to forget Maggie by entering the hellish world of dating and sex. But every time he starts to move on, Maggie comes back into his life. I think Maggie is an anchor for Josh in a lot of ways. He always comes back to her, compares everyone to her. It’s hard to let go of your first love. It gets easier to move on from relationships once you understand that it is possible to fall in love again.

AM: Who are some of your creative influences?
ME: My theater teachers, Kristen Wiig, Terry Gilliam, Laura Dern, Dianne Wiest, Louis C.K., Julianne Moore, David Lynch, my family, my best friends. Also, people on the street. Strangers.

AM: Do you have a dream role you’d like to play?
ME: Any kind of villain. And Hamlet. Mostly deranged characters.

AM: What else can we look forward to?
ME: I’m writing a show with AnnaKonkle and Sam Zvibleman about middle school called Pen15. The R-rated, uncensored version.

Photo courtesy of Craig Stubing, unwrittenfilms.com.
This story was originally published in our Spring 2015 issue. Get your copy here. 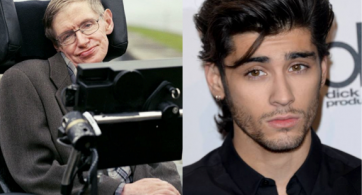 You probably know Zayn Malik as the British Pakistani heartthrob who stole the hearts of teenage girls (and boys) worldwide as a member of One Direction. Although he meant […]