Everyone deals with at least one identity crisis throughout their lives, and according to the A24 film “After Yang,” even robots are no exception.

Written and directed by “Columbus” creator Kogonada, the film premieres today, March 4 and follows a futuristic family as they’re faced with a difficult decision. Jake (Colin Farrell) and his wife Kyra (Jodie Turner-Smith) must figure out what to do with the robotic caretaker and stand-in big brother Yang (Justin H. Min) for their adopted daughter Mika (Malea Emma Tjandrawidjaja) after the technosapien becomes unresponsive. Jake then goes on a journey to find a way to repair Yang, and throughout learns just how big of an impact the robot has made on their family.

Min, Turner-Smith and Kogonada came together over Zoom to explain the introspective nature of the film and how they brought their personal experiences to create nuanced portrayals of their characters. Min in particular thought a lot about Yang’s very nature in order to get into the mindset of the role.

“The thing I kept going back to as I was exploring this character was, How can he be of service?” Min said. “That’s all Yang really cares about, and that’s why he asks these questions about his Asian identity, because he wants to be the best cultural techno he can be for his little sister. In many ways that’s such an Asian sentiment, this idea of familial duty and wanting to do what we can for our families.”

Kogonada then went on to explain how questioning what it means to be Asian provided a valuable starting point for a film as contemplative as “After Yang”. “Maybe all humans feel displaced, and we feel it more acutely,” Kogonada said. “But it’s hard to be in this world. It’s fragmented and maybe there’s some deeper resonance with just feeling alienated in general.”

Watch the full interviews in the video above, and be sure to check out “After Yang,” in theaters and streaming on Showtime now! 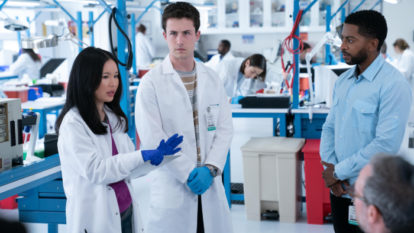