André Dae Kim is ready to sink his teeth into his new role as vampire heartthrob, Christian Ozera.

Before becoming a blood-sucking vampire, Kim rose to prominence starring as Winston Chu in “Degrassi: The Next Generation” and “Degrassi: Next Class,” and as Dylan Edwards in “Salvation.” Now, the Toronto native is playing one of the leading roles in the original series, “Vampire Academy,” streaming on Peacock.

“Vampire Academy” follows teen vampires as they prepare for royal vampire society and the dangers that come with it. Kim’s character, Christian Ozera, is an intelligent, yet snarky vampire who hails from high vampire society, but is outcasted due to his parents’ unforgivable actions. The show is based on the novel series of the same name by Richelle Mead and the 2014 film starring Zoey Deutch and Lucy Fry. Needless to say, the “Vampire Academy” fandom has been anxiously awaiting the television series, which dropped Sept. 15.

During our recent interview, André Dae Kim detailed his role as angst-filled Ozera, the difficulty comparing a movie and TV series of the same premise, and his deep dive into vampire lore. “I had never watched “The Vampire Diaries” or anything before,” said Kim. “I decided, ‘Okay, I’ve got to educate myself.’ I watched some of “Legacies” and “The Originals.” I knew my general lore when it came to werewolves and vampires. No garlic, wooden stake, no reflection in the mirror. I had my knowledge before, [but], I did do a little bit of a vampire study sesh as well.”

Catch the full interview above, and don’t forget to watch “Vampire Academy,” now streaming on Peacock! 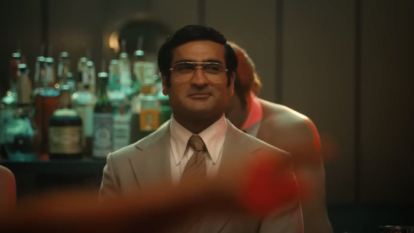