“Are you ready for the time of your life?”

The first look at Hulu’s “Welcome to Chippendales” promises just that. The true crime drama series stars Kumail Nanjiani as Indian immigrant Somen “Steve” Banerjee, who becomes the unlikely founder of the male stripping empire. The newly released 45-second teaser, featuring a distorted version of Journey’s “Any Way You Want It,” follows Banerjee on his rise to power—and his will to keep it. While the teaser provides a glimpse of glitz and glamor, it also shows tension between Banerjee and Nick De Noia (Murray Bartlett) that threatens the Chippendales enterprise. “You can’t take this personally—this is business,” Banerjee says in voiceover as a lifeless body appears on blood stained bed sheets.

“Welcome to Chippendales” streams on Hulu Nov. 22. Will you be ready to explore what lies beneath the company’s hunky exterior? 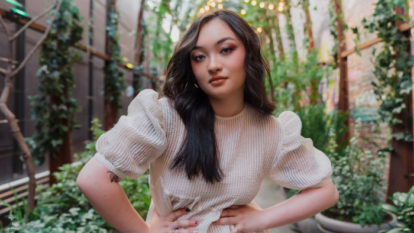 The singer-songwriter grew up in a spotlight of internet virality, but regardless, she keeps things balanced.