With her iconic bowl-cut and unflinching approach to stand-up comedy, Atsuko Okatsuka stands out in any lineup. She got to prove that beyond a doubt during the recent Netflix Is a Joke festival, which ran from April 28 to May 8 of this year.

“[Netflix] ran me ragged, but in a good way,” Okatsuka said in a Zoom interview with Character Media. “I like being busy, and I got to showcase all kinds of my performance.”

She has plenty of performance styles to offer. The half-Japanese, half-Taiwanese comedian has been crushing stand-up stages since as early as 2012, when she joined Jenny Yang and Yola Lu to co-found Dis/orient/ed Comedy. In the decade since, Okatsuka has kicked off her own podcast (touted as “a woke Japanese game show”), started teaching dancehall fitness and appeared on “The Late Late Show With James Corden.” That’s all in between performing sold-out comedy shows and releasing hit video skits that often feature her grandma, whom Okatsuka describes as her best friend.

According to Okatsuka, her collaboration with her grandma happened organically as she began to find success in comedy. Fans can watch videos of the two dancing and joking together all over Instagram and TikTok. “When I started performing more and more, and I was able to play and be myself, [my grandma] was like, ‘Well, maybe I want to join, too,’” Okatsuka said. “We all have a childlike self, and that’s just me unlocking it; her unlocking it at the same time.”

Considering the recent increase in stand-up comedy’s popularity, Okatsuka (and her grandma’s) audience has only continued to grow, both in theaters and online. “More and more people listen to stand-up comedy now than before,” Okatsuka said. “The more people get represented in specials, lineups can reflect it, and the gatekeepers aren’t as scared that a more diverse lineup won’t sell tickets.”

For more, including Okatsuka’s introduction to stand-up, her process of refining her work and exactly what she got up to during Netflix Is a Joke, watch the full interview above! 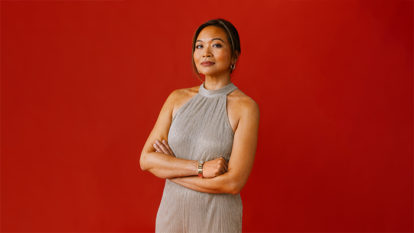 Known for her work on “Crazy Rich Asians” and “Raya and the Last Dragon,” Lim now stands poised to make her directorial debut.