Just about everyone sees themselves as the hero of their own story. But Filipina filmmaker Martika Ramirez Escobar makes the concept literal in her debut feature, “Leonor Will Never Die.”

After premiering at the 2022 Sundance Film Festival in January of this year, “Leonor Will Never Die” won Escobar the World Cinema Dramatic Competition Special Jury Prize for Innovative Spirit. The film went on to make waves on the wider festival circuit, with screenings at CAAMFest, the Los Angeles Asian Pacific Film Festival and the Toronto International Film Festival. It was also recently nominated for an Independent Spirit Award for Best International Film.

“Leonor Will Never Die” stars Sheila Francisco as Leonor Reyes, a retired filmmaker in the Philippines who falls into a coma after a television set falls on her head. While under, she finds herself playing the hero of her own unfinished action film script, able to live out her wildest dreams and discover the perfect ending to her story. Rocky Salumbides, Bong Cabrera and Rea Molina also star in the film, which began screening in select U.S. theaters on Nov. 25.

Escobar recently joined Character Media to share how she made a brand-new kind of action hero in Leonor and discuss some of her inspirations in crafting “Leonor Will Never Die.” “I always wanted it to reflect the times,” Escobar said. “Action films specifically, even from the ’70s and ’80s, reflect a certain time and a certain experience of the people. But what I wanted to explore was a woman in a very macho genre.”

The director went on to note that while “Leonor Will Never Die” pays homage to classic Filipino action movies, she wanted to appeal to a shared sense of humanity through Leonor’s character. “In these hundreds of Filipino films in the past, they would just be about bloodshed and killing all the bad guys; fights and shoot-outs,” Escobar said. “I wanted to see how problems can be solved through a tender manner. In this film, she’s in an action film but the way that she solves problems is not through killing people, but through making them understand that they are human as well.”

Watch our full interview with Escobar above for more! 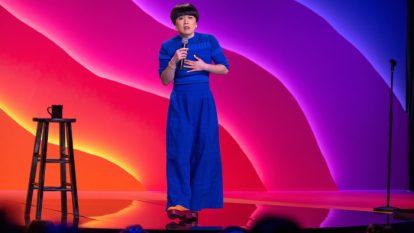 The L.A.-based comedian, actor, and writer fondly dedicates her first comedy special to all the “weirdos” and outcasts of the world.