“Beasts of No Nation” director Cary Joji Fukunaga tackled a whole new beast when he took on Daniel Craig’s final appearance as the iconic MI6 agent 007 in “No Time to Die,” the latest movie in the James Bond franchise.

Set five years after the events of “Spectre,” Bond has retired and is living in Jamaica, only to be reeled back into action after an MI6 scientist goes missing. With the announcement that this would be Craig’s last outing as Bond, Fukunaga realized he had the privilege and the challenge of wrapping up this Bond’s 15-year tenure and sending him off—preferably with his signature martini in hand. “What Daniel has that’s unique among other Bonds is [having] interconnected films,” Fukunaga said. “How do these stories come together and land in a satisfying way in the end? So that was my main thing, and to do it not just as a [singular film] but something that felt part of a whole.”

But just because Craig is passing on the 007 mantle doesn’t mean the position is vacant. “No Time to Die” also introduces “Captain Marvel”’s Lashana Lynch as Nomi, the agent who inherited the 007 title after Bond’s retirement. “Nomi as the second generation … coming in and that conflict [of] rubbing against the old and new ways of doing business was really fun to play with,” Fukunaga said, explaining how the new character added to the number of intelligent, talented women Bond surrounds himself with. “I think in this film, it picks up that tradition with multifaceted [and] multidimensional women that make far more interesting, dynamic stories within the Bond context.”

As the film finally premieres over a year after its initial intended release date, Fukunaga hopes the long-awaited conclusion of Craig’s Bond provides both a proper send-off for the actor and a new beginning for the next generation.

Watch the full interview above to hear more and watch “No Time to Die” in theaters. 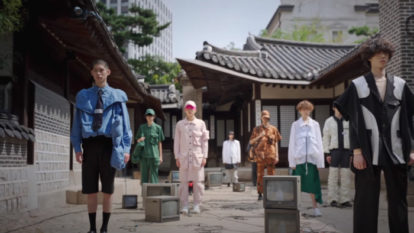 Fashionistas from all over the globe can attend the 2022 Spring/Summer edition of Seoul Fashion Week, which starts virtually today.