In case you somehow missed it, “Everything Everywhere All at Once” is now playing everywhere, all at once.

Directed by Daniels, A24’s latest release premiered on March 11 and follows Evelyn Wang, an ordinary woman who must learn to master the bounds of space and time in order to save her family. And the rest of the infinite multiverse. Oh, and file her taxes on time. No biggie. The legendary Michelle Yeoh plays Evelyn, with Ke Huy Quan as her husband Waymond, Stephanie Hsu as her daughter Joy and James Saito as her elderly father. Jamie Lee Curtis also stars as a no-nonsense IRS employee determined to make sense of the Wang family’s taxes.

Daniels Kwan and Scheinert joined the rest of the cast to share their stories of making a film about the multiverse. Kwan explained that the reactions he received after starring in the music video for Lil Jon’s “Turn Down for What” helped influence the duo’s decision to center the movie on the immigrant experience. “This one organically became the perfect one to do that with,” Scheinert said. “It had been something we’ve wanted to do for a while.”

Yeoh also commented on the diversity seen in the film, from Joy’s arc as a queer, Chinese American woman, to Evelyn’s storyline as a mother and a business owner. “When you have a story that’s told like this, then the Asian Americans, the Asian community, or any immigrants can look up and say, ‘My story matters,’” Yeoh said. “I feel very blessed that I am given the opportunity to tell it, and I will continue to fight for this every day of my career.”

Hsu likewise shared her thoughts regarding the growth in representation we’ve recently seen on screens, and how she hopes that continues to evolve in the future. “What I’m most excited about is getting to a point where we’ve seen so much identity and diversity in Hollywood that it doesn’t become about that anymore, and there are still so many barriers to break,” she said.

Watch the full interview above for more, then head to your nearest theater to catch “Everything Everywhere All at Once!” 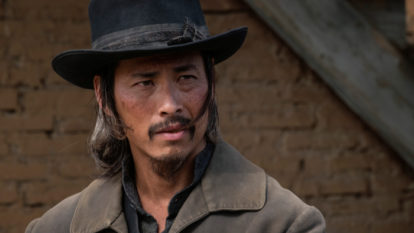 The “Nocturne” star plays the deputy of a dried up desert town in the new AMC+ series, which premiered on March 10.