It’s late morning in the tiny Conejo Valley hamlet of Westlake Village. Designed to look like an old world European farmhouse dropped into suburban L.A., the Stonehaus Wine Restaurant and Vineyard is a cozy venue with fire pits and artisanal sandwiches. It’s also an unlikely place to spot one of the hardest working martial artists/actors in Hollywood doing the mabu. Mark Dacascos doesn’t care about the other diners staring at him with bemused expressions; he’s 100 percent committed to demonstrating the kung fu horse stance. His knees are bent into a wide squat. His hands are held parallel in front of him, palms flat as if pressing an invisible wall. His green-eyed gaze is stern and focused. He holds for what seems like an eternity. And then he holds a little longer.

Dacascos might be mixed, but there’s nothing half-assed about his filmography, which includes Wo Fat on “Hawaii Five-O” and the apple-crunching Chairman of “Iron Chef America.” Dacascos brings grace, heart and humor to his roles, like in the video game-inspired bro fest from the ’90s, “Double Dragon,” to his face-melting moment in “Cradle 2 the Grave” with Jet Li. And this May, Dacascos will star alongside Keanu Reeves in “John Wick: Chapter 3—Parabellum.”

Because the threequel’s premiere is still several weeks away at the time of the interview, Dacascos is coy about describing how his character fits into the storyline. But he will say this: “If there are fans out there who want to see my character fight Mr. John Wick, they will probably not be disappointed. I would say that we probably have a really interesting relationship. It is probably intense and violent and maybe some other little elements that some people wouldn’t actually expect, but will appreciate.” And then he tantalizingly offered another not-so-subtle clue: “I was in New York for three months, and I had a lot of bruises on my body.”

Dacascos was born and bred for this life. Both his father and stepmother were martial arts instructors, so he grew up in a dojo and fought competitively since he was 6 years old. For a dozen years, he fought one to two semi-contact tournaments a month throughout his entire childhood. And unlike mixed martial arts today, in Dacascos’ time of bare-knuckle fighting, groin kicks were allowed. “I remember Wednesday or Thursday, I’d start getting nervous because, instead of going to play football or basketball or picnic or just hanging out, I’m fighting,” Dacascos says. “My mom and dad were all fighters, so we were all going to fight. And they loved it. So I was going to love it whether I loved it or not.” Dacascos placed first in 95 percent of the tournaments.

He was born in Hawaii to parents of mixed heritage, descendants of a mish-mash of immigrants who came to the islands generations ago. He can trace his mother’s heritage back to Hiroshima, where many of his relatives perished with the bomb. His mother’s parents came from opposing sides of World War II. “My grandmother was second- or third-generation Japanese [American] living in Hawaii, and my grandfather was a strawberry-blonde, blue-eyed Irishman from Kentucky,” says Dacascos. “He joined the army and went to Hawaii to work as a surgical technician at Tripler Army Hospital. Pearl Harbor happened, and so he helped the doctors with amputations. He was literally sawing limbs off wounded soldiers, and in some areas, just standing ankle deep in blood.”

Dacascos has such a wide-ranging mix of ethnicities and life experiences, he says his “23andMe pie is more colorful than a rainbow.” As a child, he moved around a lot, including a stint in Denver. In Germany he remembers being the only foreigner, and the only one with mixed blood at his school. As a teenager in Hamburg, he was inspired by Jet Li in “Shaolin Temple” to pursue the monkhood in Taiwan.

“I sold my drum set,” Dacascos recalls. “I saved some money from teaching martial arts classes with my dad. One of my friends loaned me some money and I got myself a ticket to Taipei. So at 17, I left Germany for my third country and lived there on my own for six months. I taught conversational English and conversational German to pay for my apartment, kung fu classes and Chinese language lessons.”

As a champion martial arts fighter, Dacascos was eager to get started with his Shaolin master and begin sparring like the other students. But his teacher had other plans. From seven in the morning until noon, Monday through Saturday, for two weeks, his teacher forced him to practice the aforementioned horse stance before he could train with the rest of the class.

After six months in Taiwan, Dacascos’ weight had shriveled down to nothing. Though he could live with the cold showers and grueling monastic lifestyle, he couldn’t live without women in his life and decided to leave Taiwan. “After wanting to be a monk, I thought, ‘What am I going to do now?’” He considered the military, becoming a writer or a teacher. He found himself in San Francisco, teaching martial arts and aerobics at his mother’s school. During his lunch break one day, two men stopped him on the street and asked him if he was an actor. He demurred. They encouraged him to audition for an independent movie. He was reluctant since he had zero acting experience.

“First day I’m on the set, ” he says, “I’m doing an improv scene with the lovely, beautiful and talented Joan Chen. Are you kidding me? I thought, ‘Wow! Huh, I get to tell stories. I get to learn. I get paid to kiss the beautiful Joan Chen? Acting is good.’” Although his brief debut scene in Wayne Wang’s “Dim Sum: A Little Bit of Heart” was eventually cut, his mind had been made. Dacascos was going to be an actor and started working continuously in the ’90s.

His racial ambiguity has been a mixed blessing. It has cost him roles because he either looked too Asian or too white for the character. At the same time, his mixed heritage permitted him to further his acting as well. “I think my upbringing and being mixed kind of steered me into the acting profession,” Dacascos says. He adds that he might not look Asian enough to play a full-blooded Korean, Japanese or Chinese, but casting directors thought he looked ambiguous enough to play Marlon Brando’s half-leopard, half-human son in “The Island of Dr. Moreau” in 1996.

In the 20-plus years that Dacascos has been performing for the camera, he has been hurt more times than he can count. As little Conan on “The Adventures of Conan: A Sword and Sorcery Spectacular” at Universal Studios, a sword sliced through his cheek and split his nostril in half. He’s had eight teeth knocked loose and four chipped. He’s been speared, clubbed and had scores of stitches, brushed off the pain and went back to work to do it all over again. His wife and child joke that he has brain damage, but Dacascos has struggled with tension headaches since his childhood tournament days. “So I’ve been hurt, but I’ve been fortunate to not be terribly hurt,” he says, smiling.

Over the years, Dacascos has also realized that he can’t fight his way through all of his scenes. And though he’s physically comfortable in auditions, he wanted to strengthen his vocal chords. “That was something that I hadn’t trained like the rest of my body,” he says. So he studied with drama teachers, such as the now deceased Gary Austin, the founder of the Groundlings, Larry Moss and Patsy Rodenberg, who he has worked with for the past 14 years.

“Mark is one of the most delightful human beings I’ve had the privilege to work with—a master in his own right,” Rodenberg said over email. “He is a brilliant martial artist and someone seeking and achieving excellence in every field he touches. He has worked with humility and diligence on his voice and his connection to language with the same engagement he puts into his brilliant martial arts skills. He is a joy in the room and a profoundly focused actor.

Her preferred teaching method utilizes Shakespeare, which has inspired his performance as the Chairman on “Iron Chef America.” “When I go to New York and meet up with Patsy and her people, oh my gosh, it’s like somebody takes a syringe and shoots me with love and humility and inspiration. And I go ‘Bam!’ That’s why I’m an actor.”

Back at the Stonehaus, Dacascos finally breaks from the horse stance. Released from the pose, he grows just as animated as ever as he explains the two lessons he’s gleaned from the excruciating mabu. “One, to prove how disciplined I was, to prove how serious I was, and whether I really wanted to be there,” Dacascos says. “Two, to get my legs strong enough and my breath low enough to handle what my master was about to teach me. So, it was preparation, you know.” Although his master didn’t say so, he understood then that the horse stance was a test. “This was like in the movies, when the guys go to the Shaolin temple and they don’t let you in for two weeks or two months. You have to do the work. There are no shortcuts.” 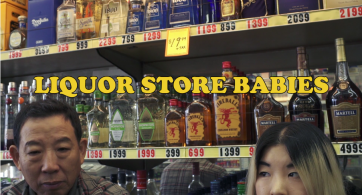 Last year, So Yun Um’s “Liquor Store Babies” traveled the festival circuit up and down the West coast. Now the Korean American filmmaker is looking to turn the short […]