After stepping inside the lavish Segerstrom Center Concert Hall, it seemed a little absurd that we were here to see just one ukelele player perform. After all, the concert hall is expansive and it seemed unlikely that single ukelele could fill the entire space. Of course, Japanese American ukelele player, Jake Shimabukuro, was quick to prove me wrong. From a balcony seat, Shimabukuro can pass off as an ordinary young hipster in a plaid shirt, but as soon as he starts playing the ukelele, it’s a different story.

Draped in a background emanating the deep pinks and purples of a Hawaiian sunset, Shimabukuro had only Nolan Verneer on electric bass as an accompaniment. Surrounded by makeshift light torches, it felt as if the audience of 2000 was watching an intimate performance for 20 people. And all of that was credit to Shimabukuro’s playing.

Perhaps it was silly to doubt a ukelele virtuoso like Jake Shimabukuro. After his cover of “While My Guitar Gently Weeps” went viral in 2006, Shimabukuro catapulted into international fame. He went on to compose the soundtracks for the movie Hula Girls and the Japanese remake of Sideways, and he even started in his own documentary Jake Shimabukuro: Life on Four Strings (now available on Netflix).

Despite how much you think you know about Shimabukuro, it seems nothing can quite prepare you for a live performance of his. Throughout the concert, I could feel his music stirring emotions and personal memories that had long remained dormant. His music is simply transcendent.

Audrey Magazine: When and why did you first start playing the ukelele? Was there any one person or thing that inspired you?

Jake Shimabukuro: I was born and raised in Hawaii where playing the ukulele is very common. It’s a big part of the culture there, so all the kids learned it when you’re in school and all that. And my mom played it a lot. When I was four years old, she sat me down and taught me a few chords and I just fell in love and I haven’t put it down since.

AM: Do you feel your background as a fifth-generation Japanese American born in Hawaii influences your work?

JS: Oh, definitely. I probably wouldn’t have played ukulele if I wasn’t born in Hawaii. Growing up in Hawaii, Japanese culture is very common and as a kid, I was very familiar with Japanese cuisine. I like sushi and tonkatsu and shrimp tempura and steamed rice and all that stuff. And of course just culturally– things that are very cultural in Japan was familiar to me growing up. So definitely my Japanese heritage has definitely played a large part in my music and in my life. Growing up, I was fascinated with Japanese folk instruments like the koto and the shamisen. All of that really intrigued me and so that influenced the way I see music, the way I interpret melodies and in my composition.

AM: What is a typical day of practice like for you? How strict are you when it comes to practice?

JS: I play every day. I’ve been preparing for the world’s first ukulele concerto performance, so I’ve been working my butt off for that. Also, I just got off the studio making a new record.  Right now, I have a bus tour with an eight man crew, so a typical day for me is just waking up in the morning and then practice an hour. After that, I have breakfast and a cup of coffee, check emails, then practice again while making notes on my setlist for the performance. Sometimes after that, there are interviews I have to do. Then it’s soundcheck, dinner and then the show.

AM: You first became an internet YouTube viral sensation in 2006 with the Beatles cover “While My Guitar Gently Weeps” and since then you have done a number of covers. What has been your favorite cover so far?

JS: The one I have been playing a lot of recently is “Bohemian Rhapsody,” and people really love it. It’s a classic iconic rock tune.

AM: What types of music do you normally listen to and how does that influence your work, particularly for your original compositions?

JS: It’s a little bit of everything… Traditional Hawaiian music, Japanese folk tunes, traditional Japanese pieces, classical music, folk music, punk music, rock’n’roll music. It has helped me to evolve as a musician. Every genre has helped me evolve.

AM: You currently have a documentary on Netflix called Life on Four Strings. Can you tell us more about that? Has the documentary made you even more recognizable than before?

JS: The director was Tadashi Nakamura, a great filmmaker. He followed me for over two years. It took a while for me to get used to having cameras follow me all the time, but it was a great experience. And now, because my family was featured in the documentary, people ask me questions like ‘Oh, how is your wife doing?’ or ‘How is your mom?’ I guess they see the documentary and feel really close. So it’s really neat and I appreciate that there’s this closeness. It’s a rare thing and I don’t take it for granted and I genuinely appreciate the support and encouragement from other people who come out to the shows and who really love music and are really passionate. It’s important for people to support the arts. I wouldn’t mind doing it again, if somebody wants to.

AM: What advice can you give to anyone who wants to start learning the ukulele?

JS: The best advice is to just have fun. The ukulele is supposed to bring joy. It’s supposed to make people feel good. 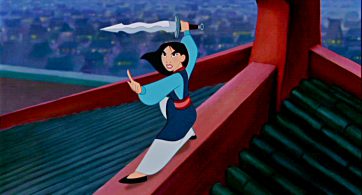 As an Asian American woman who grew up in the 90’s, it almost feels cliche to say Mulan is my favorite Disney princess, but there’s no denying it. […]