A small suburb of Madison, Wisconsin, is just about the last place one would expect to find a Korean American taekwondo expert. And yet, on a brisk spring morning, that’s exactly where actor and martial artist Mike Moh is, at home with his youngest son.

“It’s kind of a free day,” Moh says. “I just got done with a workout, and I had a couple auditions earlier in the week that I’m unwinding from. But today is a relaxing day.”

A day off isn’t something Moh can take for granted. He’s been acting professionally for just over a decade, appearing as relatively minor characters in TV shows like “Empire” and Marvel’s “Inhumans,” in which he played a green-skinned amphibian man reminiscent of the love interest in “The Shape of Water.” But when the teaser dropped this spring for Quentin Tarantino’s ninth film, “Once Upon a Time … in Hollywood,” viewers immediately noticed one black-gloved figure striding across the set. Though he only appears for a few seconds of the trailer, Moh, outfitted with Bruce Lee’s iconic style and accent, is impossible to miss as he spars verbally and physically with Cliff Booth (a long-haired Brad Pitt).

While playing Lee might sound like any actor’s dream gig, as it is for Moh himself, representing someone as iconic as the martial artist is no cakewalk. Lee is a worldwide cultural legend, and Asian Americans of all ages look up to him as the embodiment of fighting skill and sheer coolness. “From the moment that I got the audition and I read the scene, I felt this half-excitement and half-dread,” Moh says. “Everybody knows what Bruce looks like, how he sounds, how he oozes charisma and attitude on the screen. If I wasn’t spot-on, it’d be very easy to see that I missed.”

Fortunately, Moh came prepared—and confident. “I know him as this amazing philosopher, as an actor. And I knew from the beginning, there is nobody in the world who can play Bruce better than I can at this moment,” says Moh. Though he politely declines to give specifics, he’s had a few other opportunities to portray his idol in the past, but they have all fallen by the wayside for one reason or another. With a wry laugh, he says, “I truly believe the universe was looking after me.”

There does seem to be an element of fate to Moh’s meteoric rise. He recounts that he’s always enjoyed putting on plays and performing, and growing up as an Asian kid in Minnesota meant he had plenty of experience being scrutinized by his peers. As an adult, he got his “first taste of show business” doing stunt work on “Rob-B-Hood” (2006), a Chinese comedy vehicle for Jackie Chan, another one of Moh’s martial arts and acting inspirations. Watching Chan (whom Moh describes as “such a nice guy”) made Moh realize that he wanted to perform as an actor, not just as a stunt double. “I made the decision; I want to be an actor who also happens to be great at martial arts,” says Moh. “My first acting job was something called ‘Kamen Rider.’ That was one of the first roles where I got to combine acting with martial arts. And that was my wheelhouse.”

Despite his recent turn in the limelight, Moh is staying humble—he might be self-assured, but he’s not conceited. And he’s not worried about what comes next after playing such a career-defining role. He’s in the Liam Hemsworth-led “Killerman,” due for release this fall. And when it comes to his family, Moh has his priorities set.

“Becoming a father took so much pressure off me as an actor,” says Moh. “I don’t feel like my whole existence is going to revolve around my next role, or my next job or anything. My number one thing is that I need to be a great father to my kids.” The glitz and glamor of Los Angeles might beckon, but Moh is happiest on the plains of Wisconsin. 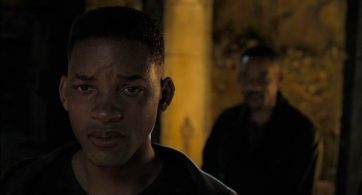 Strap in for a wild ride, because the second trailer for “Gemini Man” just dropped. The movie, set to premiere Oct. 11, features Will Smith opposite… Will Smith. In […]