“How I Met Your Mother” holds a special place in sitcom history. Led by Josh Radnor from 2005 until 2013, the nine-season hit series was nothing short of legen—wait for it—dary.

For fans of the original show, or even newcomers looking for their next binge-watch, the spin-off “How I Met Your Father” is here to provide a new take on all the highs and lows of modern dating. Hilary Duff stars as Sophie, a 20-something looking for love in (mostly) all the wrong places. Aided by her roommate Valentina (Francia Raisa) and friends Sid (Suraj Sharma), Jesse (Christopher Lowell) and Ellen (Tien Tran), Sophie embarks through New York City on her search for forever. The series premiered on Hulu on Jan. 25 of this year and has since been renewed for a second season.

Character Media caught up with Sharma and Tran for an insider look at how the beloved series concept has been updated for modern-day audiences. “I feel extremely lucky and honored to play Ellen, who is a queer, Asian adoptee,” Tran said. “It’s really exciting to be a part of representation where these stories can be told without the trauma of those intersecting identities.”

Sharma went on to add that the series’ diverse representation should better be described as simply normalcy. “It’s just how life is,” he said. He later noted his hopes for audiences to enjoy the show. “I hope you find friendship, you find love, you find an escape, and yet you find a way to give yourself ideas on how to live life,” he said. “I just hope it’s a nice, friendly space for people to come and feel welcomed, just like Pemberton’s.”

For more, including Sharma and Tran’s fave “How I Met Your Mother” characters, watch the full interview above! 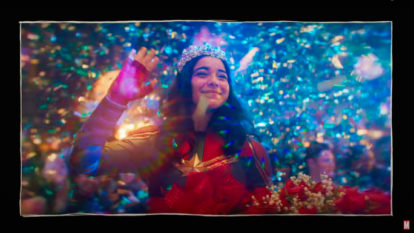 Starring Iman Vellani, the Disney+ series will premiere in the summer of 2022.