Lee, a self-described huge Dodger fan, kicked off the pre-game festivities by belting out a power rendition of the “The Star Spangled Banner” before the Dodgers battled the visiting Florida Marlins.

The 15-year-old You Tube sensation and KoreAm cover girl (Sept 2010 issue) told KoreAm that fulfilling her lifelong dream of singing at Dodger Stadium was “such an honor” and “an amazing experience.”

Other fans attending the game were also impressed by Lee’s performance.

“You have a beautiful voice,” one woman told Lee after her performance. “It gave me the chills.”

The high school sophomore delighted the more than 34,000 fans in attendance again when she returned to sing “God Bless America” during the seventh-inning stretch.

Other pre-game festivities featured a performance by the UCLA Hanolim Korean Traditional Drumming Team, an introduction of various Korean American community leaders and Yeon-sung Shin, the Korean Consulate General who threw out the ceremonial first pitch.

And yes, the Dodgers won the game in the bottom of the ninth on Dioner Navarro’s base-loaded single to drive in Casey Blake for a 3-2 victory for the Blue Crew. 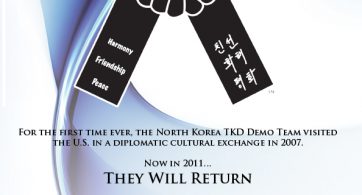 A group of taekwondo athletes from North Korea will tour select cities on the East Coast later this month. The 17-member team will provide demonstrations in New York City, […]